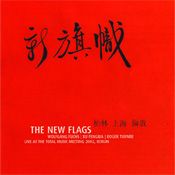 What's immediately notable about New Flags is the notes. The music contained is a remarkable, fast-paced meeting of reeds, percussion, the koto-like stringed guzheng and voice: tightly wound, impressionistic improv, of-the-moment and not restrained by traditional jazz idioms. (And as it was recorded at the German new music festival Total Music Meeting, this comes as no surprise). But the notes present the music as a meeting of cultures, of European and East Asian influences, as, somehow, traditionalist.

As free improvisation and extended technique enter their fifth decade in the lexicon of jazz, perhaps it's fair to look at the forms as cultural traditions. The descendants of AMM, Evan Parker and Derek Bailey, the searchers for sound, have developed geographical dialects. German, Japanese and American improvisers have all built on (what could be argued as) the framework set in London in the early ‘60s. When Xu Fengxia writes that "the monophonic traditions of our Chinese music blend with polyphonic styles of Eastern Europe and something new arises," the references make more sense in terms of 20th century improvising traditions, rather than as court music, wedding songs, marches or dirges. A better argument might be that the musical equivalent of free association has become a global tradition, incorporating, at times, pre-20th century elements, but not beholden to borders and boundaries.

All of which is interesting at best. But this trio does take from a long tradition of sustained horns and muted strings, and they play quite well. Fuchs, who favors the extreme ends of the horn family, plays bass and contrabass clarinet and sopranino saxophone. He's the leader of the King Übü Örchestrü and has worked with Cecil Taylor, Tony Oxley, Barry Guy, Hans Koch, Evan Parker and others. Xu Fengxia began studying Chinese string instruments when she was 7, and went on to perform with Peter Kowald (including a set at the Vision Festival) and with a variety of Chinese composers. Drummer Roger Turner's CV includes work with Alan Silva, Annette Peacock, Elton Dean, Otomo Yoshihide, Shelley Hirsch, Joëlle Léandre, Eugene Chadbourne and others. The trio, in other words, has seen much of the development of free music.

Together, they kick up a storm, Fuchs and Fengxia often playing as percussively as Turner. The music ebbs and flows, the three well predicting each others' turns. It's not clear, at least to this scribe, how long it takes for a movement to become a tradition, but this trio is at the front line, waving their flags and staking claim to a nation of free improvisation.