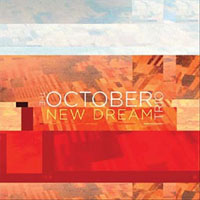 In recent times, Vancouver, Canada has produced a hotbed of jazz-centric talent, outlined by an improvisational superstructure of sorts. On New Dream, The October Trio conveys a resourceful melding of various musical inflections amid a great degree of flexibility and moxie, featuring a wily sequence of events where each member plays a significant role.

The trio teeters on the outside, but not far enough to be classified within the free jazz schema. Here, multi-woodwind artist Evan Arntzen pursues rough-and-tumble crescendos with edgy metrics that complement the spacious thematic movements, designed with understated melodies, venomous rhythmic flurries, and an in-the-pocket groove quotient. Arntzen's willowy notes and up-tempo deviations add a multidimensional factor to the program, but the trio grinds matters down to an inward-looking perspective during its cover of Björk's "You've Been Flirting Again," as clarinetist Arntzen locks into pensive balladry and nourishes the inherent melody line along the way.

Drummer Dan Gaucher's softly sweeping brushes and bassist Josh Cole's animated framing of the perimeter yield sympathetic support. The trio implies a rather inspiring story, shaded with a lyrically resplendent primary hook. Arntzen's phrasings take on vocal attributes while surging the intensity level a few notches toward the finale, then lowering the pitch back to where it started. Good vibes, intermingled with open, world-like textures and an accessible format are just a few important drivers that underscore the band's heterogeneous output.