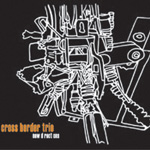 The Cross Border Trio bring a freewheeling spirit to New Directions, their first album. Paquito Villa (drum set and percussion) was responsible for getting the trio together when he invited Jason Robinson (tenor saxophone) and Joscha Oetz (bass) to form a group with him. Rob Thorsen came in when Oetz moved to Lima.

The trio works interesting territory. Robinson leads the charge, his tenor the beacon for the rhythm section. He has a raw energy; he's a big brawny player who nevertheless can go all soft and gentle, and swing as well, bringing a welcome balance to the music.

"Hell in Hat Yai serves the diversity of approach well enough. Thorsen beckons Robinson's free-flowing tenor into a bop mould, and soon the tenor man is in the thick. The tune zips along deep in the groove before it turns into a happy swinging number. But the die has not been cast. Thorsen and Villa indulge in a frisky duet, and Robinson comes back and swipes in some steely free blowing.

A lighter, bouncier air captures "Conclusion/Beginning, which gets its tang from Thorsen's walking bass, Villa's accents and rhythm, and Robinson's probe as he extrapolates on the melody. The harmonic structure of "Red Light switches tangent from a balladic intro to a full-blooded bop tune. Robinson loosens several fertile ideas as he churns up a storm. The switch comes when Thorsen and Villa temper the fire by opening space and letting the structure breathe. The modulation lets Robinson ride the tune out on the melody.

All in all, a fine debut.