New Compositions From Huddersfield On Another Timbre

By JOHN EYLES
January 19, 2014
Sign in to view read count
Soon after Another Timbre was inaugurated in autumn 2007, its proprietor Simon Reynell said, "My interest in contemporary classical music has continued alongside my passion for improv, so I was very clear that I wanted Another Timbre to cover both areas. However I soon discovered that most classical music is prohibitively expensive to bring to disc, unless you have a wealthy patron or commercial backer. So whereas I'd really like a third of the releases to be classical, the reality will be a lot less." With the benefit of hindsight, that quote now makes surprising reading. Since the label's early days, when many fans were attracted by the presence of high profile improv players—John Butcher, Phil Minton and Evan Parker spring to mind—Reynell has taken us on a voyage of discovery, introducing more and more composed music, much by lesser-known composers. In recent years, the proportion of releases that feature compositions has considerably exceeded the third which Reynell spoke of back in 2008. Two of the label's recent releases indicate that Reynell has hit upon a reliable source of new compositions— Huddersfield. 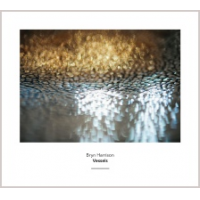 Vessels consists of the seventy-six minute title piece for solo piano. It was composed by Bryn Harrison who studied composition with Gavin Bryars at De Montfort University, Leicester, before himself becoming Head of Composition at Huddersfield University, where this recording was made in July 2013. Harrison says the piece is entirely about repetition—the micro-repetition of intervals, the repetition of phrases and the repetition of sections. He took pitches from a nine-note Messiaen mode and ran them simultaneously forwards and backwards through the cycle so that the pitch intervals are constantly expanding and contracting. He tried to get across the sense of the music being perpetually regenerative, of constantly opening up but then ending up in the same space.

This performance was by pianist Philip Thomas, for whom Harrison wrote the piece. Thomas joined the staff at Huddersfield in 2005, becoming Head of Performance in 2010. He is increasingly being featured on Another Timbre releases. The piece was recorded as a single take—no mean feat given its frequent repetitions. Its success owes a great deal to Thomas's powers of concentration.

While the composition is extremely easy on the ear and appealing on the surface, over its full duration the experience of listening to it becomes increasingly like being lost in a hedge maze; step follows step with a regular, relentless inevitability; the scenery is beautiful and relaxing but ultimately the subtle changes in it do not conceal the fact that one keeps returning to the same points over and over again from different directions. And just as being lost in a maze means that no ultimate goal is reached, here the repetitive structure leads to no resolution and one is left with the impression that it could have carried on indefinitely... In fact, the recording reaches no conclusion but stops and fades away at a seemingly arbitrary point in its flow. Just like a maze—fascinating, memorable and intriguing.

Logical Harmonies consists of seven compositions by Richard Glover, a composer based in Huddersfield where he was a research fellow in the university music department, teaching in composition and music technology and, in 2010, completing his PhD in Music Composition with Bryn Harrison.

The album is not a suite, its central five tracks being vastly different to one another and performed by five different performers—two solo, three ensembles; those five tracks are bookended by the remarkably similar "Logical Harmonies 2" and "Logical Harmonies 1" (which, illogically, respectively open the album and close it). That pair share certain characteristics with "Vessels." Both played by Philip Thomas, each of them consists of regularly sounded piano chords which evolve slowly and then stop without having reached any obvious climax or resolution. As above, it is as if the pieces are part of a greater whole and could have continued indefinitely.

Thomas is featured again in an ensemble on the central track, "Cello with Clarinet and Piano," his piano joined in a trio by Seth Woods' cello and Jonathan Sage's clarinet. The piece consists of a series of notes struck and sustained on the piano, with the cello and then the clarinet following in its wake with subtly modulated notes of their own. For nearly seven minutes, that comparatively simple formula makes seductive listening, laden with great emotional impact.

In fact, that sums up the strength of this album—all of its tracks seem ridiculously simple but each of them is affecting in a subtly different way. All seven are utterly compelling, making it difficult to say which is the best. By a nose, that honour just goes to the longest track, the contrarily titled "Imperfect Harmony," a solo bass performance by an Another Timbre favourite, Dominic Lash. In it, he bows a series of dyads each consisting of an open string and a stopped one, moving from an opening dyad to a destination one by a glissando on the stopped string, with each repeat the opening and destination dyads get closer. This gives the piece immediate surface appeal—enhanced by the physicality of the bass tones—plus enough detail to listen out for and make repeat listenings rewarding. Richard Glover certainly sounds like he is going to become habit forming...