Ravi Coltrane's sound is his own, but the paternal stamp comes through in little similarities of voice and expression. 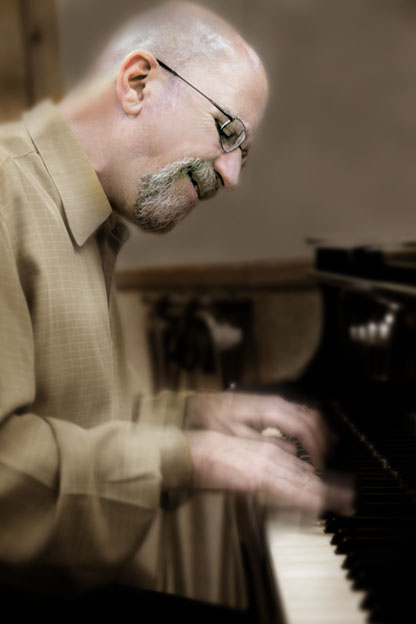 Mark Soskin is one of the more underrated pianists working today. Perhaps best known for his sideman work alongside greats like Sonny Rollins and Herbie Mann, Soskin combines an always melodic approach with a rich vocabulary that draws on a wide range of influences.

On May 2, he brought a new quartet—featuring Ravi Coltrane on sax, Jay Anderson on bass, and Victor Lewis on drums—to the lounge of the Kitano Hotel. With room for no more than 60, the set provided an intimate encounter with a group discovering its chemistry on the bandstand.

The set opened with the rhythm section taking the stage unaccompanied by Coltrane. After a piano introduction, the group launched into a bright, swinging melody, with a sound reminiscent of Bill Evans' classic trios. Lewis helped build the tune by switching from brushes to sticks, while Soskin maintained the up-tempo coolness with looping runs across the keyboard. This propulsive energy eased into a lyrical solo by Anderson, but resurfaced when Lewis added an exclamation point to the end of the tune with a cymbal clatter.

On the second tune, "This is New," Coltrane took the stage, tenor in hand. The piano trio played the first chorus without Coltrane, but the saxophonist joined in on the second, harmonizing with Soskin and then launching a cosmic storm with his out-there shredding. Soskin followed up with a dizzying, extended solo, mixing McCoy Tyner-esque open voiced harmonies with his own sound.

The next tune, Soskin's "17," featured strong, melodic work from the leader. His hands danced up and down the keyboard, while occasionally stomping a few sharp block chords. As the piano laid back, Coltrane began to solo. He played pensively at first, but soon rose up on his toes, bobbing and weaving as if he were trying to evade a knockout punch. In this boxer's pose, Coltrane dug harder and deeper into the chords.

On the fourth piece, Soskin grooved along in an Eastern mode, leading into an intricate call and response between sax and piano. Ringing chords from Soskin's right hand led to skating, dancing repetitions, which in turn spun off into new melodic variations with hints of Brazilian and Indian music. Soskin finished his voyage with an emphatic chord in the left hand, clearing the way for Coltrane to take center stage.

Reaching ever greater heights as he flew along on his lush, vocal tenor, Coltrane made playing seem easy: He stepped nimbly along a delirious unison sax and piano line, ran rich harmonic circles through his horn, and drew strength from the group's energy to power his calls. His blend of virtuosity and vocality tore the tune to bits.

In the past, Coltrane has seemed to consciously avoid taking up his father John's impossibly heavy mantle; but, increasingly, the son sounds like, well, Coltrane. Ravi's sound is his own, but the paternal stamp comes through in little similarities of voice and expression.

The comparison between father and son was heightened with the fifth song of the night, which suggested hypnotic John Coltrane ballads like "Psalm" and "Alabama." Soskin lifted the rubato melody into the piano's higher registers, giving a bright, somewhat nostalgic sound to the tune before rumbling out a deep ostinato. As the bass and drums stormed back in, Coltrane added darker hues, passionate cries, and slight whispers.

The set closed with "For Heaven's Sake," in which the bass carried the melody at a medium-slow tempo before launching into a swinging, standard feel. After a high-speed Soskin solo, Coltrane entered to stretch the music out, playing with deep tones and bluesy licks. As he had on previous numbers, Coltrane built his improvisation into a chromatic whirlwind—full of flash, fire, and careening altissimo.

The intelligence of Soskin's writing and the players' chops imbued the set with the intensity and deep expression of the best live jazz. Lewis seemed to struggle with the dynamics of the close room— sometimes too loud, but also not quite comfortable enough to bring the explosive kick that he's capable of- - but it was still clear that the chemistry was there when he engaged the others in dialogue.

The arrangement of sax, piano, bass, and drums has covered so much ground that finding new territory would seem almost impossible. Even still, four great players found themselves fitting together here with subtle nods to classic tradition, and enough fresh ideas to move things forward. If this carries over to their upcoming studio session for Kind of Blue records, we might be treated to one of the year's best albums.