By EDWARD BLANCO
August 7, 2017
Sign in to view read count 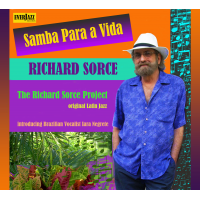 Samba Para a Vida—New York-based pianist and composer Richard Sorce's third album of Brazilian-styled jazz from his group the Richard Sorce Projecti—s a delicious blend of ballads, light bossa novas and sambas, all captured in a superb package of vocal and instrumental performances, resulting in one enchanting musical taste of Brasil. One thing is certain: there's plenty of music to sample on this recording, featuring fifteen original compositions including seven songs sung in Portuguese by Sao Paulo's Iara Negrete.

Accompanying Sorce on this effort is a cast of eight additional players comprising a band that, besides the standard rhythm section, also includes percussion, guitar and a brass/horn section featuring horn alto saxophone, flute, trumpet and trombone, rounding out a nice nine-piece ensemble that almost produces a big band sound at times.

This light and warm album, subtitled "Original Latin Jazz" but with a touch of Brasilia, begins with two vocal compositions featuring Negrete: "Escrito No Vento (Written in the Wind)" and "Antes De Te Conheser (Before I Knew You)." They set the stage for the first instrumental: the brief but bubbly and percussive title track, featuring solos from the leader, as well as trumpeter Fred Maxwell. One of the first ballads on the disc is the slow and gentle "Forever Again," before the music turns to vocal pieces once again.

Sorce fills the repertoire with so many pleasurable moments that this is one recording where all of the pieces are keepers. Two of the finer moments are the album's last two tracks: "It's Always New," and the balladic finale, "No One Else but You," both worthy of repeated spins. As Sorce states in the liner notes "the music...might be somewhat reminiscent of the Brazilian style of the '50s, '60s and '70s," and that's precisely what makes Samba Para a Vida such an enchanting musical statement. Well done!

Escrito No Vento (Written In the Wind); Antes De Te Conhecer (Before I Knew You); Samba Para a Vida; Forever Again; Cante (Sing); A Chama (The Flame); Danca Do Sol (Sun Dance); Say It Softly; Seu Olhar (Your Eyes); Once More; Me Deixe Perto (Let Me); Another Day In Paradise; Vozes (Voices); It's Always New; No One Else But You.