New CD Promises Jazz from Beyond 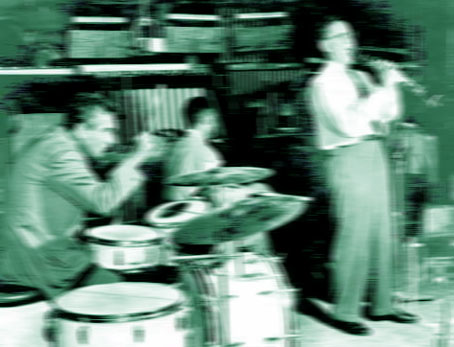 David Gurnitz is excited. The president of the North Jersey Paranormal Association, and an ardent jazz fan, has captured yet another of what he believes to be proof of some of the greatest names in jazz history jamming from the "other side."

"Listen," he says, turning on a small digital recorder that had recently spent an entire night recording in an otherwise empty nightclub in Bayonne, "hear that? That's Benny Goodman. He played there in 1938."

Somewhere, in the deep shush of white noise, may (or may not) be the sweet swinging strains of Goodman's clarinet. I will admit, I thought I heard the phantom refrain of "And the Angels Sing." But it might have just been the wind wailing through the HVAC ducts. Or it could have been cars passing outside. Or just my imagination.

With most paranormal "evidence," as most self-styled ghost hunters call it, most of your interpretation of it depends largely on what you believe. A skeptic might listen to the five or so minutes of static-y silence and hear nothing. A believer may clearly hear Goodman and Krupa and Charlie Christian. And most, like me, aren't quite sure what they hear.

Jazz from Beyond (2010, Fantôme Records) is a multimedia collection of "evidence" from Gurnitz's exhaustive paranormal investigations of some of the northeast's most storied jazz venues. Town Hall, the Cotton Club, the Village Vanguard; all are represented. As are, to varying degrees, some of the most dearly departed names in jazz from Louis Armstrong to John Coltrane to Jackie McLean.

Gurnitz, a full-time bail bondsman and part-time paranormal investigator, has compiled over 200 hours of jazz-themed "evidence" which he has culled down to just over 89 minutes of some of the highlights. Is that Duke Ellington playing "East St. Louis Toodle-oo" at the Cotton Club? Maybe. Coltrane and Eric Dolphy going toe-to-toe at the Village Vanguard on "Naima?" I honestly can't say that it isn't. And what of the EVP (electronic voice phenomenon, the capturing of otherworldly voices on a recording that aren't audible to the human ear at the time) of Miles Davis calling a particularly inquisitive investigator a "f***ing idiot?" I reserve comment.

Included on the CD are several video clips taken from the investigations. There is the orb of light that appears to dance to the tune of Art Blakey's "Along Came Betty." There is the microphone stand onstage at the Blue Note club that startlingly adjusts itself, just before what really does sound like Dizzy Gillespie playing a bit of "A Night in Tunisia." And I still don't have a good explanation for the clip of what appears to be mist resembling Charles Mingus repeatedly slamming a piano's keyboard lid and then punching a spectral Jimmy Knepper.

Be aware that, for obvious reasons, this CD does not contain full versions of the listed tracks. In fact, most of the tracks are open for interpretation even among believers. What is credited as Louis Armstrong playing "Struttin' With Some Barbecue" sounds, to me, like someone clearing a trumpet's spit valve. The oddly-titled "Bill Evans Getting It" is, so far as I can tell, just seven minutes of a vague tinkling sound that put me in the mind of one of those relaxation CD's that feature the sound of wind chimes being gently jostled by a soft breeze.

Of course, as I've said, your experience may vary greatly depending on your beliefs. But if you do accept the possibility that there are things in this world beyond our understanding, and that they may be captured by night vision cameras and digital recorders, then this CD might be right up your alley. And even if you aren't quite sure what lies beyond this mortal realm, there might be something on this CD for you as well.