By GREG CAMPHIRE
April 3, 2008
Sign in to view read count 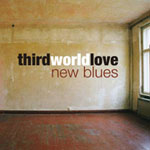 International collective Third World Love drops its fourth release in the form of New Blues, and it's a refreshing take on the trend of incorporating a global outlook into the stream of African-American music. The band members—featuring 3 Israeli expatriates and a bona-fide New Yorker—have all absorbed the blues language and applied it to various planet-spanning ethnic styles, referencing swing, Dixieland and post-bop as well as flamenco, salsa, samba, klezmer and various Middle Eastern strains. The album is truly a collaborative band effort, as each member contributes compositions and co-production credits, with tasteful instrumental chops to match.

"Homeland," with its minor-key waltz and an overlapping 6/8 vibe, evokes the ominous tension and alternately fragile/explosive aura of bassist-composer Omer Avital's native Israel; but the piece's shifting moods give equal spotlight to the storied land's grand traditions, eternally proud hopefulness and eclectic confluence of integrated cultures that once existed in harmony.

Trumpeter/flugelhornist Avishai Cohen contributes three tunes, the most striking of which is "Gigi et Amelie," appearing here in its second recorded rendition after its inclusion on Braid (Anzic Records, 2007), from family collective 3 Cohens. With a lilting waltz flavor recalling Miles Davis' interpretation of the title track from Someday My Prince Will Come (Columbia, 1961), the elegant and playful song is fit to be a future standard itself.

Avital's "Hamina" is likely the band's live dancefloor killer, employing its own sense of Middle Eastern swing with gusto, in a style referred to as "Mizrahi" music. One can just imagine a crowd of sweating bodies getting their groove on with abandon as the sinewy jam works its way to a frenetic head.

Pianist Yonatan Avishai penned "Beauty of Death," which is, appropriately, a slow blues. The song is part of the album's final triumvirate of blues-based material, which also includes the title track's spirited polish on a New Orleans groove as well as the closing rendition of Duke Ellington's lesser-known "So," originally heard on the maestro's trio session Piano in the Foreground (Columbia, 1961). The band plays the rare piece of Ellingtonia straight-ahead, with all the right notes in all the right places, making a fitting conclusion to a very strong effort.