By WOODROW WILKINS
April 16, 2006
Sign in to view read count 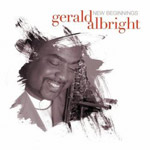 The best songs on New Beginnings come before the midway point. Even so, the rest isn't bad. With a variable lineup of sidemen, including Walter and Wallace Scott of the Whispers, Jeff Lorber and Paul Jackson Jr., Gerald Albright delivers a nice mix of smooth jazz and instrumental soul grooves on his Peak Records debut.

Albright began professionally by touring with keyboardist Patrice Rushen, who appears on the title song, and becoming a first-call fixture by other recording and touring acts, including Barry White, the Temptations, Stanley Clarke and Teena Marie. He backed Anita Baker in the mid-1980s and was later signed to Atlantic Records, just as the style of music known as smooth jazz became popular—although several years passed before radio began calling it that. He's also toured with Phil Collins, who discusses their relationship in the liner notes.

Nine of the twelve tracks are Albright originals, mostly in collaboration with his bandmates. Ironically, the title reflects Albright's family's recent move and his new relationship with Peak Records, a change which he says has given him more creative freedom. The irony is that more than half the songs are cut by formula, similar to the hordes of sax-led pop instrumentals already on the market. One has to wonder what freedom was required to employ drum programming on so many tracks when Albright's touring drummer, Tony Moore, appears on only three—two of them covers of "Georgia on My Mind.

Still, New Beginnings is a nice package. It opens with the high-energy "We Got the Groove, which features a tour de force by Albright on alto, tenor and baritone saxophones, flute, and bass guitar. He's joined by Jeff Lorber on keyboards and guitar, Paul Jackson, Jr. on guitar and Teddy Campbell on drums. The title song, appropriately, is one of the most freely expressive tracks on the album. Rushen's acoustic piano adds a touch of elegance. The Scott brothers appear for a fresh arrangement of the Whispers' "And the Beat Goes On that, while listenable, doesn't draw attention from the original. Perhaps the best track on the album is the Hoagy Carmichael/Stuart Gorrell classic, "Georgia on My Mind. With Tracy Carter on keys, Melvin Davis on bass, John "Jubu Smith and Moore on drums, Albright is in the zone. Playing alto and tenor saxophones, he delivers a powerful lead on this soul/blues offering. The song is reprised at the end of the album.

Extensive programming and play-it-safe melodies dominate this mostly formulaic recording, but that's not necessarily bad. Ultimately, what matters is whether the music is any good. How it's made shouldn't matter, but it often does, taking a lot away from excellent performances by the lead artists. That isn't the case with New Beginnings. It helps that Albright does much of the programming. Add the soulful elements and you have an album that, while formulaic on the surface, is all-around pleasant.