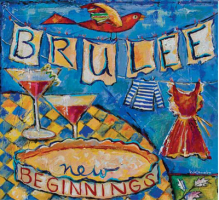 Jazz has always been about being musically clever in inventive ways. Consider only Charlie Parker saying, on October 24, 1947, "I'm going to play "Embraceable You," winking, and then playing a completely different melody over the harmonic structure, and the cleverness in jazz is defined. Now, add a sense of humor to the proceedings and the whole creative affair goes from lo-fi to hi-fi at light speed.

Just consider these mash-ups: Blossom Dearie's "Tout Doucement segueing into Fats Waller's "Ain't Misbehaving"; Rosemary Clooney's "Come On—A My House" rubbing up against Spencer William's "I Ain't got Nobody"; and easily the most inspired combo, Frank Sinatra's "I've Got You Under My Skin" and The The Rolling Stones' "Under My Thumb." These unlikely pairings work perfectly in the hands of Weiner and Onstad, who are at no loss of a sense of humor. The Sinatra/Stones collision is deliciously ironic and head-spinningly iconic. This is truly old wine in new wine skins.

The pair's idea of standards, on the surface, looks innocent, but proves to be anything but. After (fairly) straight readings of "Skylark" and "Summertime" (straight, at least, for this pair, each demonstrating Weiner's clarion voice) Bob Dylan's "Love Minus Zero No Limit" bobs to the surface enigmatically challenging the very definition of a jazz standard. The Dylan chestnut is updated to the 21st Century, while The Mamas and The Papas are "California Dreamin'" on GHB, before appearing on a tandem episode of Intervention.

The disc highlight, however, must be the Dinah Shore-inspired cover of The Rolling Stones' "Dead Flowers" from Sticky Fingers. The only way to properly appreciate this cover is to imagine Dinah's Place, circa 1971, the host hosting the Glimmer Twins on the program while treating them to this cover with Jerry Garcia playing pedal steel guitar.

On the technical side of things, Brulee incorporates elements of the Jacqui Sutton/Henry Darragh "Frontier Orchestra," appearing on Sutton's Billie & Dolly. Use of strings, pedal steel guitar, and accordion make for a slight sepia tone around the edges of this finely crafted music, like a hint of Noilly Prat in a prairie martini.

Miracle of Love; Perfectly Flawed; Skylark; Tout Doucement/Ain't Misbehavin'; Summertime; Dance With Me; Come On a My House/I Ain't Got Nobody; Love Minus Zero No Limit; Si C'est Un Oui (If It's Yes); I've Got You Under My Skin/Under My Thumb; Dead Flowers; New Beginnings.