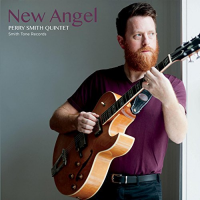 Perry Smith is a Brooklyn, NY-based guitarist and composer who received his Bachelor of Music degree from the Flora L. Thornton School of Music at the University of Southern California. He also holds a Master's degree in music from New York University. A founding member of the critically acclaimed New West Guitar Group, he is the host of a weekly series in Brooklyn called The Nest Session, which features the guitarist performing with different groups of musicians every Wednesday. The Nest Session is made possible by a generous grant from KeyedUp.org, in conjunction with the Jazz Foundation of America.

Smith plays a jazz box and his style is rooted in the jazz tradition of Jim Hall and Wes Montgomery with the modern colors of Pat Metheny and other post-bop resonances. The guitarist joins forces with saxophonist Jon Irabagon, pianist Glenn Zaleski, bassist Matt Aronoff and drummer Allan Mednard on New Angel, which features ten Smith-penned compositions full of this generation's jazz language.

"Rise and Fall," begins the set, opening with Smith playing colorful chords on his acoustic jazz box, strung with round wound strings. Mednard enters with a quick brush pattern on the snare and the adventure is off. The theme is melodic but angular, and modern in articulation and color. Smith and Irabagon create a beautiful sound together as they convey the melody. Smith's solo builds and the influence of Metheny can be heard in his dynamics, phrasing and use of chromaticism. His lines are fluid, with just a hint of delay to make the guitar full and horn-like. The band interacts with Smith to help him build his solo and it is obvious that they have spent time on the bandstand together.

The title track has a complex rhythmic structure that the band navigates with fluidity and confidence. The straight-eight feel fits the melody and harmonic setting. Smith gives his solo breathing space in-between his quick lines, which are usually chromatic in nature. Aronoff and Mednard provide a full bass line and pulsing groove for Smith. Irabagon takes the final idea of Smith's solo and builds upon it. The band seems inspired and turns out a strong musical statement that is exciting and melodious.

"Monk's World" possesses an outstanding head, with the band's fast, driving feel showing its most bebop-informed virtuosity. Zaleski's solo is outstanding, while Smith's is imaginative, featuring repeated motivic patterns bathed in clear rhythms and lines that confirm the harmony. Irabagon's solo settles just how flexible the band is with its imaginative listening. Medanrd's solo is musical and brings out the highlight of the melody. This is a tune with a nice head, allowing the band to shine: well-done, all around.

New Angel has an enjoyable mix of styles and harmonic colors. It certainly has a contemporary feel, but the musical ideas are clear and the musical language is familiar to the jazz vocabulary. Many jazz fans will find it easy to digest, its subtleties easy to savor. Smith has the ability to catch your ear from several directions with his improvisational technique and melodic phrasing. With good writing and excellent playing by this solid group, New Angel provides plenty for deep listening and enjoyment.