By KARL ACKERMANN
February 19, 2019
Sign in to view read count 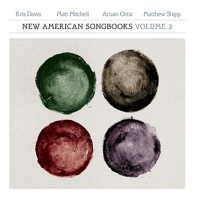 Nate Wooley—as a Producer—equals his composer, improviser, and trumpeter alter ego. The editor-in-chief of the journal Sound American and distributor of music through the label of the same name, has issued a second edition of his forward thinking New American Songbook series. New American Songbooks, Volume 1, (Pleasure of the Text, 2017) was a cooperative trio of drummer Greg Saunier , guitarist Mary Halvorson and Ron Miles on cornet. Unlike any number of familiar "Great American Songbook" collections, this one featured reimagined Beach Boys, Beethoven, Duke Ellington, and The Partridge Family(!). And yes—it actually works. The follow up, New American Songbooks, Volume 2, is different on at least two levels, but equally intriguing.

Volume 2 features a notable line up of modern piano virtuosos: Kris Davis, Matt Mitchell, Aruán Ortiz and Matthew Shipp. Each performs separately, again interpreting other's compositions in an eclectic collection that further expands Wooley's concept. Shipp opens the album with the eighteenth century African American spiritual "Let Us Break Bread Together" and the 1872 hymn, "I Need Thee Every Hour." The first of the two is rendered in rousingly authentic gospel style while the second is taken further out of its natural environment. Mitchell takes on two little known, and low-key pieces, "Identity Picks," originally a pop song, and "You Made a Drawing"; both are by far the most overtly melodic tunes on the album.

Davis offers the most familiar piece—at least in name—with Carla Bley's "Sing Me Softy Of The Blues" from Dinner Music (WATTS/ECM, 1977). The bluesy—turned brassy—original is transformed to a discordant version with prepared piano and mysterious subtilties. The album closes with "Sketches Set Seven," a brilliant piece from Aruán Ortiz written by the all-but-forgotten Ed Bland. Bland was a composer and filmmaker whose 1959 documentary Cry of Jazz (Quantum Leap, 2004) is now considered a historical benchmark in African American cinema. Originally recorded on Althea Waits Plays African American Composers (Cambria, 1993), the composition was played in five segments at a more rapid pace. Ortiz seamlessly weaves the sections together, and takes a more avant-garde approach.

The results are just slightly mixed on New American Songbooks, Volume 2, but not because the music or performances are lacking. Mitchell's selections, while very appealing, feel a bit out of place in the context of the edgier material. It's a small quibble as these four pianists are a pleasure to hear and Wooley's vision for changing the way we think about the standards of creative music is principled. The album was released in a limited vinyl edition but is now available only as a digital download.

Track Listing: Let Us Break Bread Together; I Need Thee Every Hour; Identity Picks; You Made a Drawing; Sing Me Softy Of The Blues; Sketches Set Seven.