The Bad Plus: Never Stop

By THOMAS CARROLL
February 2, 2012
Sign in to view read count 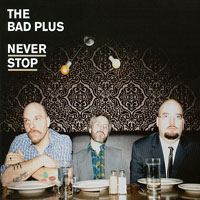 For the past decade, The Bad Plus has received both praise and criticism for its idiosyncratic approach to jazz-rock. Liberal jazz fans and those who are inclined towards the mainstream but want to dabble in jazz have enthusiastically received the band's modern piano trio reworking of rock standards such as Nirvana's "Smells Like Teen Spirit" and Rush's "Tom Sawyer." Conversely, jazz purists tend to shy away from The Bad Plus and its backbeat-intensive and sometimes bombastic playing.

Never Stop is the band's first studio album to offer exclusively original compositions. Although the album often lacks the raw energy of Prog (Heads Up, 2007), it still exemplifies the trio's perpetual tendency to shift between harmonic complexity and melodic satisfaction. The compositions highlight group interaction rather than individual solos. Pianist Ethan Iverson's smart playing—a blend of jazz wit and classical orchestration—guides the music and David King's wild drumming provides a highly textured contrast to some of Iverson's simpler melodies and backgrounds, while bassist Reid Anderson acts as more of a compliment to the pianist's right hand than a partner in groove with King, something the drummer probably doesn't need anyway.

Each song bares the distinct mark of The Bad Plus sound, yet the album includes much variety. The differences between the first two tracks—"The Radio Tower Has a Beating Heart," a free-flowing piece driven by dramatic ascents, and "Never Stop," a harmonically pop sounding tune with a danceable four-on-the-floor drum beat—illustrates this concept of homogeneity in diversity, as the musicians' distinct personalities are evident on both tunes. The album also presents a sense of musical humor not foreign to the trio. Ballads like "People Like You" and "Bill Hickman at Home" (played by Iverson on an out-of-tune piano) show very few signs of the sentimentality common to the style. Similarly, the thrashing "Beryl Loves to Dance" and jumping gospel-flavored "Super America" seem to mock overzealous musical styles as the band sporadically throws in dynamic shifts contrary to the original mood.

Overall, Never Stop lacks some of the excitement of previous releases, and certainly does not match the momentum of a Bad Plus live performance. However, the album accurately captures each member's musical persona, and reflects how much fun these three cats have when they play music together.

The Radio Tower Has a Beating Heart; Never Stop; You Are; My Friend Metatron; People Like You; Beryl Loves to Dance; Snowball; 2 P.M.; Bill Hickman at Home; Super America.