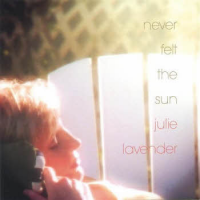 The New Age music that Julie Lavender surrounds herself with carries an emotional appeal through its simple pleasures and relaxed composure. Classical music and folk music in a contemporary setting give the singer vast opportunities for exploring the contemplative universe.

Trained as a classical guitarist, Lavender owns a solid musical background to support her ideas. She employs a variety of auras, from mainstream jazz to Broadway, smooth jazz, and telltale folk singing.

While several of her ballads reveal a wider modulation in tone and an awkward separation of voice from accompaniment, Lavender remains convincing through most of the album. Her arrangement of "Velvet Arms of Midnight" allows her vocal interpretation to swoon deeply, and her arrangement of "When I Fall in Love" places her voice behind an overpowering wall of synths and strings.

She's at her best with jazz and classical pieces that utilize acoustic instruments and allow her voice to take center stage. "Bachianas Brasileiras No. 5" and "Tin Man" stand out as the session's high points.

Visit www.julielavender.com for audio samples from the album.