By FRIEDRICH KUNZMANN
February 22, 2018
Sign in to view read count 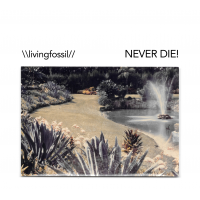 \\livingfossil// is the most recent brainchild of Canadian saxophonist Gordon Hyland. The Toronto-based musician and composer continues to release his versatile compositions in a multitude of formations of various different names, such as the acoustic saxophone trio Simple Shapes or the progressive-electronic project Ninja Funk Orchestra. Members of the latter are reunited with Hyland on his newest endeavor \\livingfossil//, making for an intriguing instrumentation of two saxophones, two electric guitars, drums and an electric as well as acoustic bass. The compositions are mostly Hyland originals and represent some of his most focused work to date. At the same time, he never abandons his affection for the most versatile sounds and styles—going from straight post-bop as, demonstrated on "baby steps," to progressive-rock ventures such as the title track "Never Die!"

The record is clearly divided in two main compositional approaches: The former is defined by more adventurous sounds and extensive workouts, aptly introduced by the atmospheric soundscapes of the opening "Macrophages" that build up to a 10/8 -5/4 driven by a synth-simulating bass line and lively drum syncopations. The subsequent "Living Fossil" is one long dynamic build-up over a cyclic harmonic progression. Hyland introduces the melody on sax and increasingly adds more sidesteppings, arpeggios and further improvisational techniques, always synchronous with the dynamic reach of his backing musicians. The effectiveness and climaxing moment of this simple approach over an extensive seven minutes is impressive and serves as a most welcome contrast to the following title track. The latter introduces a multitude of different themes and moods in just about the same period of time. Not only harmonic, melodic and dynamic factors enforce the versatility of this composition but the shifting meters and tempi alone make this a most enticing experience: Starting off with a slow jam on a straight 8/8 the band seamlessly changes to a funky 7/8 groove before completely deconstructing the piece with high-pitched saxophone shrieking leading to a quiet melodic section on another 8/8. The composition then rebuilds on a faster 8/8 with a snare hit on every offbeat accompanying a noisy electric guitar solo before ending on another 7/8 excursion.

"Lorraine" introduces the more classic post-bop influenced side of things. The constant motion in pace and rhythm remains but within the boundaries of traditional bop parameters such as harmony, melody and arrangement, making for a stunning rendition of the Ornette Coleman original.

After the hard rocking 5/4 that is "Satellite"—again part of the more progressive program of \\livingfossil//—Hyland shows off one of his own bop compositions, highlighted by the doubled up saxophone leads on the melody. "Baby Steps" puts the tenors in the spotlight, displaying highly captivating dialogues between Mike Murley and Gordon Hyland. "Listen To The Quiet Voice" is another enticing show of Hyland's saxophone skills over a melancholic progression that, as earlier on, demonstrates rich dynamism by all involved.

One little shortcoming lies within the lacking use of the extensive instrumentation. One would expect further polyphonic and polyrhythmic development attributed to a cast that features two guitars, but the band decide to make use of this double contingent in a more atmospherical fashion. A choice that—to some extent—seems wasted. This tiny flaw though does not keep \\living fossil// from assuming an intriguingly original and mature sound while at the same time never being afraid of bending genre-boundaries, ultimately leading to a candidly adventurous record.