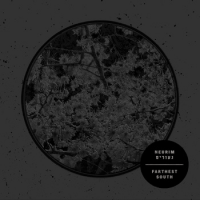 The Israeli improvisational trio Farthest South explored distant musical universes in its previous albums—free jazz with local sax hero Albert Beger on Omens & Talismans (2013) and ambient-space rock on Spheres & Constellations (2013). Only on its third release, Neurim (youth in Hebrew} the trio dares to tackle one of the sore aspects of the Israeli reality—the constant awareness of war. And more important, that the Israeli regime subjects its citizens to a reptilian consciousness of endless, futile wars, sacrificing its sons and daughters in a meaningless ancient ritual.

On Neurim Farthest South teams with young Israeli poet Ron Dahan, who served as a reserve soldier in the second Lebanon war (2006), son of a soldier whose youth were "slaughtered within a night" (as Dahan tells it) in the 1973 war against Egypt and Syria, and one that contemplates if his own, future children are not destined to fuel another insane war machine. Dahan wrote a poem book that attempted to make sense of the horrific scenes of the 2006 war, to detach and cleanse himself from the excruciating experience.

The poetic stream-of-consciousness tales of Dahan, are tapped organically to the nervous-searching collective sonic subconscious universe of Farthest South. Soon Dahan finds out that he can not process or reflect on the war experiences while he is fully aware. The only way that he can reference the frightening, vivid scenes of terror, death and massive destruction are through extensive usage of chemical substances— ecstasy and LSD, sexual fantasies or from a distance, journeying in the hyperreality of Tokyo that mirrors the dense, chaotic reality of war. Just then the memories of the war and the new, disillusioned understanding that there is little hope for a slightly better future, not even a peaceful one, are bearable. And then he realizes that the only thing that one can accomplish in a war, even if he is injured physically and for sure scarred mentally, is to simply stay alive, and "live" is the last word that he pronounces, the last sound of the album.

Farthest South charges this profound emotional trip with a chaotic, psychedelic soundtrack, close in its spirit to the end-of-the-sixties era of Pink Floyd (a musical reference in one of Dahan's poems). Disturbing in its threatening industrial sounds, but the trio also knows to embrace Dahan in his fragile, painful moments with gentle, compassionate sounds. Bassist Yair Yona introduces to the mix arrogant voice samples of Israeli politicians, promising to crush the enemy forces, reflecting how these sound samples are now even more hollow and ignorant than on its actual times.

Neurim is a rare document in the Israeli music scene that often opts to repress the daily consequences of war awareness and occupation of other people. Dahan and Farthest South create an inspiring synergy of vocal stories and musical soundscapes that feed off of intensify and amplify each other.

At The Heart; My True Youth Began; Nir Teaches Me; And That Day; And Time Is Not An Issue; We Passed Through; I Met Her On The Bus; We Walked And Walked (1); We Walked And Walked (2); My Father Slaughtered His Youth; In The Morning; Mother War gives Birth; LSD Partial List; A Soda Machine Burns; We Sat At A Restaurant; The Scream; LSD Interim Conclusions; The Old Woman; Before The Party Began; He Who Shoots; Walking On The Crease; Walking On The Festering; Tokyo Injects Me Like Heroin; In A Past Life; LSD Status Report; The Face Of The Dead; The German Officer; Near Morning; Nir Says We’re Screwed; We Need A New Language; We Sat Below An Arched; And On The Seventh Day; LSD Additional Clauses; In A Moment; In Those Days The Blooming; LSD Bottom Line; In The Beginning He Created War.