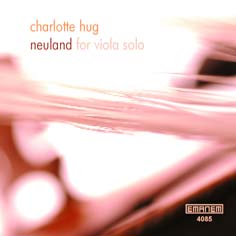 In a relatively short time in London, Swiss violist Charlotte Hug (pronounced Hoog) made a big impression through her work at All Angels, with Tony Wren's Quatuor Accorde, at the Freedom of the City festival with Maggie Nichols & Caroline Kraabel and with the London Improvisers' Orchestra.

She is somewhat renowned for performing in unusual venues. These have included ice caverns of the Rhone Glacier, and an acoustically insulated S&M torture chamber. Hug herself is a dramatic performer, strikingly beautiful, with flowing blonde locks. That in itself can be a problem, as a recording alone can fail to convey the essence of a performance. (I felt that was true of Transitions, Hug's live trio recording with Nichols and Kraabel.) Neuland, though, is a studio recording of Hug's solo viola and certainly does avoid that potential pitfall; the music here is full of drama and needs nothing to enhance or complement the experience. It consists of three tracks, one of which, "House of Detention," is subdivided into ten parts. The opening track "Delirium" features the technique developed by Hug called "wetbowing"—literally moistening the hairs of her bow. The resulting sounds can be far more brutal than one would expect, but there are also very poignant, moving periods. Hug is certainly not seeking to build or sustain a consistent mood; this is rapidly changing music containing great contrasts.

In the past, Hug has experimented with electronics in her compositions and, although all the music here was produced acoustically, several passages seem to bear the influence of that, with the recorded sound of the viola easily being mistakable for synthesised sound.

"House of Detention" is at the heart of the album, consisting of ten relatively short connected pieces. It is named after a dank, supposedly-haunted former underground Victorian prison in Clerkenwell, which Hug used as a retreat while in London. It manages to convey an atmosphere of unease and menace entirely consistent with its title.