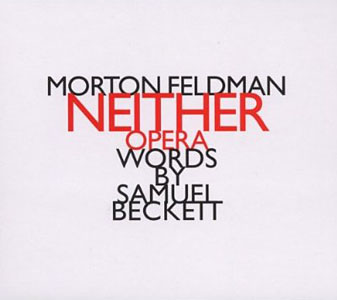 Neither is not an opera in any sense of the conventionally accepted form. There is no story, a dramatis personae of just one; no mise-en-scène... and no libretto; just 87 words by the poet and playwright, Samuel Beckett, set down on a page as if it were poetry. While there is a distinct drama in the presentation of the words and music, the absence of theater is palpable. However, there is an almighty intensity that arises from the deeply emotional manner in which words and music are unraveled. In fact, when the Beckett's poem is sung, albeit in truncated fashion, it most mimics the absent aria; even if its composer, the celebrated Morton Feldman, intended this to be a composition of operatic proportions without following convention, in aesthetic it may be treated as such.

When it was commissioned, Feldman had begun to write the music some time before Beckett delivered his poem to the musician. Feldman is known to have made significant changes to both his methods of composition as well as to the score itself, in order to allow Beckett's words to be brought to life. Neither delves into the innermost recesses of the consciousness. It does so in the shrill solitude of a dramatic monologue, sung with utter splendor by soprano Sarah Leonard, the versatile British, Guildhall-educated singer with a wide repertoire and a fine sense of contemporary music.

Feldman's music is, however, no mere accompaniment to Beckett's abstract poem or Leonard's interpretation of it. The heightened drama of what lies between "to and fro," "inner and outer," "back and forth" en route to finding the philosophical intersection of past and future in the eternal present was, for both Beckett and Morton, a lifetime's vocation. In Neither not only do their lifetime's pursuits collide, but they explode in the drama of words and music. Feldman uses instruments, and not only with a truly dramatic sense of color and texture; here he also goes a step further, almost crushing them like a medieval apothecary, melding brass and woodwinds and strings alike into a compounded choir that cries, echoes and urges Leonard in her unrelenting search for that place where the doors of perception would grant her character entry into the realm of eternal existence.

For her part, Leonard is sublime, whether she questions life via Beckett's words, or scats and wails her way through the magnificent score—in one of the most excruciating, yet edifying experiences in Feldman's repertoire.

Neither (words by Samuel Beckett).