Neil Young: Long May You Run - The Illustrated History 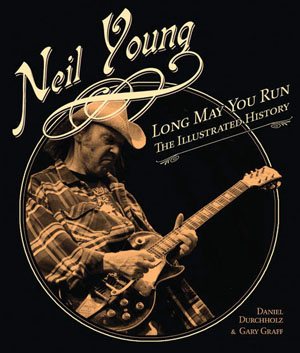 As up-to-date as it's possible for the print medium to be, Neil Young: Long May You Run is both more and less than The Illustrated History of the Canadian rocker. To be sure, there's a panoply of great photographs, of Young by himself and with his various collaborators over the years, including Crosby, Stills and Nash, Buffalo Springfield, Crazy Horse and others. And the attractively designed layout features concert posters, tickets reproductions and facsimiles of backstage passes , not to mention original artwork, that vividly decorates the pages and the story at hand..

But the real strength of this book is the focus the authors bring to aspects of Young's life and career that round out a picture of a man who's far more than just the wilful iconoclast of his public persona. There's no denying Young's idiosyncratic approach to his work and his personal life, and the relationships that he has nurtured in each, but the authors do a splendid job in highlighting particular aspects of his approach as a means of illuminating how complex the man is—and by extension how complicated is his network of connections to his family, his co-musicians and the public.

Accordingly, there are summaries of Young's on again, off again relationship with Crazy Horse—from its perspective as much as his. Recording engineer Niko Bolas illuminates his relationship with the man, the late David Briggs gets the space he deserves as producer and confidant of Neil Young for approximately 30 years, while the collaboration that is Crosby, Stills, Nash and Young receives a fresh take. For more detail about the machinations surrounding such personages, it's necessary to read Jimmy McDonough's biography Shakey (Anchor Books, 2003), but the value of Durcholz and Graff's book is to provide perspectives from different angles outside, as well as inside, Young's own.

Such content comprises roughly two-thirds to three-quarters of the 224 pages of Long May You Run (including a variety of resources besides a comprehensive discography). The rest is what you'd expect from an illustrated history; which is to say, photos aplenty (including many great action shots) as well as reproductions of concert posters, ticket stubs and memorabilia created over the course of Young's career.

The authors' meticulous approach begins at the beginning, recounting Young's upbringing and early musical endeavors and continues through his Living with War (Reprise, 2006) and archives projects. There is no drop-off in attention to detail from one phase to another. And while the inscrutable Young hasn't exactly created his very own stylized iconography—that would be too much against his idiosyncratic nature—it's nonetheless amusing and enlightening to witness the wry sense of humor he has as it surfaces in such unlikely places as backstage passes.

Perhaps even more than McDonough's book, Long May You Run paints a sympathetic picture of its subject. Granted, the authors are fans or they wouldn't have devoted themselves to this labor of love, so it wouldn't make sense to insert declarations of animosity aimed at their subject. But Durchholz and Graff are healthily objective themselves, not afraid to offer their frank evaluations of a record release, any more than they are reticent to quote the artist himself in all his candor: the raw-to-a-fault live album Time Fades Away (Warner Bros., 1973), for instance, is "a record that nobody wanted."

It may seem odd that even from a source of such fractured relationships as Young's with Stephen Stills, there's less rancor than understanding of how the man works and how his virtues outweigh his unpredictable occasionally blunt-to-a fault nature. His collaborators and his fans, including the writers and compilers of this book, admire Neil Young's loyalty to his muse and there's hardly any higher compliment any artist can earn.

Visit Neil Young on the web