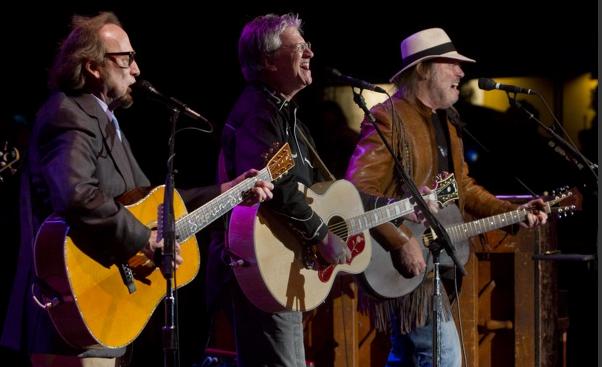 By LLOYD N. PETERSON JR.
November 12, 2010
Sign in to view read count
The Bridge School Benefit has become one of America's most anticipated annual musical events. Promoted by Pegi and Neil Young, to assist children with severe physical impairments and complex communication needs, this year's two day benefit promised to be one of the most remarkable of its 24 year history. With the first reunion of Buffalo Springfield in 42 years, it didn't disappoint.

In 1986, Pegi and Neil sought an education for their son, Ben who was born with cerebral palsy. With no alternatives available, Pegi became the brain child and inspiration of the learning institute now recognized internationally as the Bridge School. The intent of the school is to help children with severe speech and physical impairments and to assist in achieving the highest levels of education possible. The benefit, which takes place at the Shoreline Amphitheater in Mountain View, California, provides 50% of the funding required each school year. Without the artists who volunteer their own time, many of the accomplishments of the school might not be possible.

Notably, The Bridge School has been instrumental in developing augmentative and alternative communication techniques. This provides children who cannot communicate verbally or in written form, the ability to meet critical communicative needs. But what does this all mean?

Imagine being the parent of a child with a disability so severe that being able to express even the slightest human need or emotion is only a remote possibility. A handicap so disabling that acquiring the most basic grade school education is a parent's far off distant dream. How does a family come to terms with the pain and challenges of this type of existence? Intentional or not, a child perceived and treated as an outcast from society.

Is it fair to ask how an all powerful God justifies a child living in such a reality? How is it not possible to question one's own faith, and how many times must a child ask the question, why? But perhaps we are the ill-fated ones, the ones without the kind of loneliness that can bring us closer to our own existence, our own individual place in the universe. Welcome to the Bridge School.

One of the greatest moments over the two days occurred on Saturday when Pearl Jam's Eddie Vedder introduced one of the students who was sitting on stage along with the other students and parents, as the "smartest girl he knew." Proudly and with tremendous sensitivity, he explained that Maricor had just received her Bachelor degree from Berkeley this past June. A long rousing standing ovation followed and it was difficult not to shed a tear during this emotional and heartwarming moment. There may be no greater example of the rare compassion that resides in the human spirit, and for a two day period of time, all other trivial matters ceased to exist. If anyone questions the power of music, one only needs to attend this event.

This year's Benefit was also in memory of L.A. Johnson (1947-2010), a movie producer, director, cinematographer, sound editor and importantly, a board member and special friend of the children, parents and staff of The Bridge School. While a film dedicated to Johnson played in the background, Pegi and Neil danced on stage together, alone and in front of the children to the song, "Dancing in the Streets." The love for the children from this unique couple remains truly inspiring.

Johnson would revolutionize the way music was presented on film, beginning with his work on the film, Woodstock. He would follow by working on a number of collaborations with Young, which eventually would turn into a four decade lifetime partnership and friendship. His works include The Last Waltz, Bob Dylan's, Renaldo and Clara, and Joni Mitchell's, Shadows and Light. At the time of his passing, he was in production with Young and Shakey Pictures on the film about Lincvolt, a musical documentary about re-powering the American Dream.

One of the surprises this year came from Pearl Jam's performance on Saturday. The event is entirely acoustic and for some bands, going from electric to acoustic doesn't translate well. But Pearl Jam is an entirely different matter. As rock bands mature and start to take their compositions in a more serious direction, it's not uncommon for the band to lose the X-factor, the sense of urgency and essence that is the greatness and inclusive of the best music in rock. On Saturday, Pearl Jam clearly let it be understood that they are the exception.

Eddie Vedder is performing with an inspiration that has a depth and spirit transcending the music. There are different levels of "being in the moment" within art and Vedder has clearly ascended to a new and timeless place within in his own creativity. After being a part of this benefit for over a decade, he and the band have a special relationship with the children that was greatly inspiring. We can only hope that the band, Young and The Bridge School continue this collaboration for many more years to come. 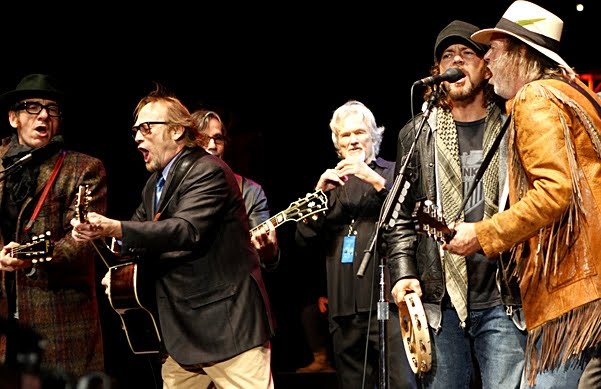 As mentioned previously, this was to be the first time that Buffalo Springfield has performed in public since 1968. What became immediately apparent was the chemistry within the harmonies between Stephen Stills, Richie Furay and Neil Young. The other wonderful surprise was Stephen Stills, who looked incredibly healthy and was as respectful to the music, his band mates and to his legacy on a level I have not observed before. Completely and intensely in the moment, Stills made me a believer again. But things got even better.

Upon the finish of, "I am a Child," Richie Furay could be seen wiping a tear and from that moment on, the band and the sound was magical in a way that brought everyone and everything together. I couldn't help wondering and hoping that it was just as beautiful for the children.

As fantastic as these three brother's were, the magic could not have happened without Rick Rosas on bass and Joe Vitale on drums. It just doesn't happen any other way. Rosas, a collaborator with Young over the years, brings a tremendous respect and humility to the music that any and all young musicians could learn from. Vitale began his career collaborating on compositions with Joe Walsh and has played and recorded with the Eagles, CSN&Y, Jackson Browne and even John Lennon. Not to be taken lightly, he is one of the few drummers that brings it every single night.

The Springfield set would end with a dynamic and acoustically played but electrifying "Mr. Soul." If this was the acoustic set, one could only imagine the intense magical transcendence of a 2nd electric set.

Neil Young simply has a presence that is larger than life. I spoke previously about the different levels of being in the moment and I don't know that there is anyone performing today that reaches the same place as Young. There are artists within the avant-garde that reach this level, but there are times when Young creates at a level and intensity not unlike that of Jimi Hendrix and John Coltrane, which has nothing to do with genre and culture, yet transcends it. Trying to play at this level too often can be tragic yet Young seems to understand the limitations and can harness the creative intensity in a way that can only be identified as genius.

Lastly, this is a special 2 day music event but let us not forget that this is still about The Bridge School and an opportunity to help make life better for a few very special children. What could possibly be more important? And at the end of the day, perhaps the real story is that we are the ones that walk away just a little richer, with a little less ego, a little more humility and just perhaps, with a little more wisdom and sensitivity, as fellow human beings.

Dedicated to the students of the Bridge School.