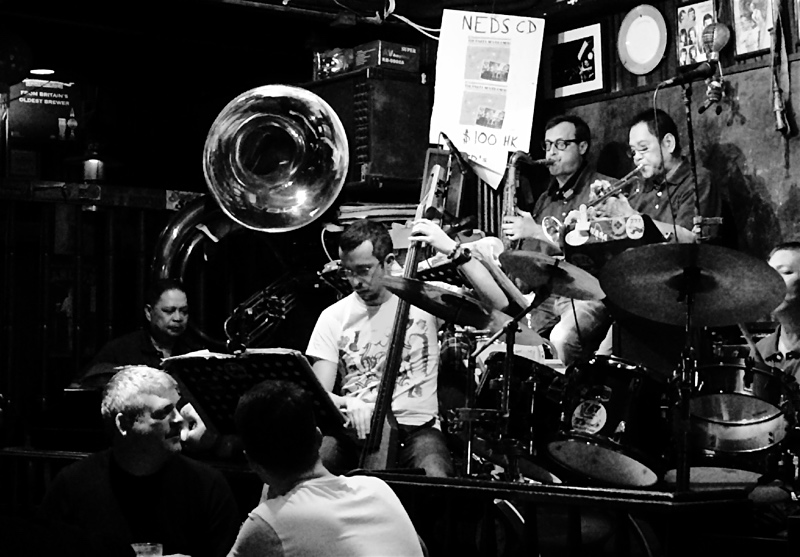 By HRAYR ATTARIAN
April 28, 2016
Sign in to view read count
Most guides to Hong Kong list the genre melding Fringe and Bert's and the loungish Blue Room among the city's jazz venues. Very few mention "Ned Kelly's Last Stand." The oldest Hong Kong pub has presented live music sessions from the start. Among those who have graced its stage include vocalist Rosemary Clooney, saxophonist Charlie Barnet and pianist Sergio Mendes. Lately it has been home to trombonist and vocalist Colin Atchison and his China Coast Jazzmen who play many hard swinging and refreshingly electrifying sets every night from 9:30PM till 1AM. Alas, on April 19th he and some of the regular members were absent from the bandstand. The remainder of his group, together with a few substitute musicians, nevertheless delivered an energetic and thrilling performance full of exemplary camaraderie and individual expression. The repertoire was primarily a mix of boppish standards and early jazz gems.

Opening with an energetic reading of "Just Friends" saxophonist Franco Valussi took a facile and agile solo that flowed seamlessly out of the main theme. Trumpeter Peping Ciriaco's burnished notes were the perfect foil for Valussi's vibrant tenor as the two traded bars over drummer Robert Flores' propulsive beats.

On several tunes Ciriaco switched to flugelhorn; an instrument that was better suited to his natural lyrical style. His laid back approach to the ballads was complemented perfectly by the rhythm section's easy flowing vamps.

Ciriaco's high blowing trumpet and Valussi's resonant clarinet fronted a trad jazz rendition of "Lady Be Good" that ended the set on a high note. Valussi exhibited an equally vivid and organic tone on both saxophone and clarinet.

During the intermission Valussi stated that when Atchison and the other regulars are present the music is even livelier and more dynamic. Email communications with Atchison, together with videos of live performances he shared, confirmed this assessment as did their self released live CD from 2014 The Party Never Ends. The album is a splendid recreation of the ambience and the scene of a night at "Ned Kelly's Last Stand."

Some of the more celebrated music spots in Hong Kong may, occasionally, host big names in jazz and others cater to more genre-melding tastes. Jazz aficionados, however, can be guaranteed a thrilling and lively time full of bluesy spontaneity, almost every night at "Ned Kelly's Last Stand" courtesy of Atchison and his China Coast Jazzmen among others.