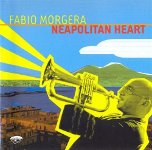 Employing a nominal septet, Morgera produces less of a "little big band" sound and more of a dense collaboration. This is illustrated on the diffuse tonal introduction to "Canzone Appassiunata" which straightens out into a tight urban head with a decidedly European flavor. "Reginella" is a moody, lopping piece with Morgera muted and pianist Craig Hartley and vibraphonist Christos Rafalides demonstrating a gentle simpatico in splendid support of the trumpeter. Rafalides' tone is tart and close and his playing expressive and romantic. Hartley takes a harder edge in his solo, his right hand seeking a quiet consonance while his left holds the line. And so the rest of the recital goes: intelligent, warm, and inviting.

Morgera has methodically and thoughtfully built a solid jazz career that has led to Neapolitan Heart, his most cosmopolitan recording. He draws from his native Italy those elements that often infuse the Latin tinge. Strite and complex percussion, descending stair arpeggios and humid dance rhythms populate the faster pieces while Morgera's plaintive flugelhorn and Rafalides' vibraphone all but consort on the ballads (the closing "Luntane" is a good example).

Morgera's focus is tight and clear on Neapolitan Heart, and the album is enhanced by his considerable production talent and his wispy melodic sense.