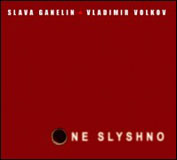 Ne Slyshno is a spontaneous live studio recording from September 2005 that brings together two bold thinking improvisers who surpass any definition of genre or style: Israeli (of Russian descent) composer/pianist Slave Ganelin and Russian double bassist Vladimir Volkov. Ganelin needs no introduction as one of the pioneers of the free improvised scene that emerged from former Soviet Russia. Volkov has been playing with modern ensembles such as the Collegium Europe and The Moscow Composers Orchestra, collaborated with like-minded musicians including Ned Rothenberg, Ernst Reijseger, Tomasz Stanko and Bobo Stenson, and with his partners in his Priority Trio, Klaus Kugel and Petras Vysniauskas.

The most outstanding aspect of this recording is that Ganelin gives up his synthesizer and focuses on the grand piano, also toying with some percussion. The busy and dense textures of Volkov further push Ganelin for some inspired, quite chaotic improvisations that are totally uncharacteristic of his more disciplined and structured playing in recent years. From the first improvisation, "1, it's clear that anything can happen, and there are no rules for this intense engagement. Volkov alters and distorts any attempt of Ganelin to lead the session and challenges him for some muscular duets.

The two stretch out on the twenty-plus minute improvisations "2" and "3, bridging the gaps between contemporary improvisation and the European expression and aesthetic of free jazz. There are moments when explorations of the basics of musical interplay are built upon, especially on "2, where Volkov's arco playing expands Ganelin's repetitive percussive elements. Volkov's bowing replicates the same circular effect of Ganelin's, with some surprising stops and childish games by both. "3" is the jazziest improvisation, with a sort of linear and more often fractured chord progression that features Volkov as an imaginative soloist and time keeper with idiosyncratic phrasing.

"4" is a slow and ethereal improvisation featuring Ganelin and Volkov busily experimenting at creating sounds out of their instruments without aiming for a common theme. The last improvisation, "5, is a playful and chaotic interplay that sounds at times like a children's song for some adventurous kids. It is a fascinating conclusion to this beautiful recording.