By KARL ACKERMANN
October 22, 2014
Sign in to view read count 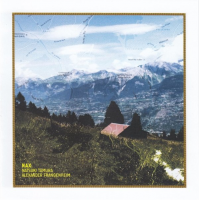 Trumpeter Natsuki Tamura has long straddled the divide between free improvisation and lyrical jazz. The latter has been adequately and beautifully represented in his work with Gato Libre. That quartet features his wife and occasional duo partner—the pianist and accordionist Satoko Fujii—and combines elements of folk, chamber and modern jazz. In contrast, much of his solo work such as A Song for Jyaki (Leo Records, 1998) is full of distorted multi-phonic explorations. Nax, a duo outing with German bassist Alexander Frangenheim, goes much further outside the parameters of jazz or music in general. An artist in multiple disciplines, Frangenheim bridges many musical territories. Having studied with a prominent Stuttgart Philharmonic double bassist and played with free jazz saxophonist John Butcher and alternative rock icon Lou Reed, Frangenheim brings a wealth of diverse musical experience to Nax.

Within noise there are unlimited possibilities for creativity. Not circumscribed by even the loosest of instrumental criteria, the freely improvised pieces which make up Nax stretch the sonic boundaries of the bass and the trumpet. Unlike Reed's polarizing Metal Machine Music (RCA, 1975) which introduced pioneering features of noise music and the later post-digital ambient evolution of noise, Nax is neither nuanced or inclusive of a musical balance. It is, rather, unforgiving, relentless and at times, punitive. The ten pieces—sequentially titled "Acun" 01 through 10—may seem antagonistic in their refusal to be anything less than restive but as the writer Alex Ross quoted John Cage in The Rest is Noise (Picador, 2007) "Any attempt to exclude the "irrational" is irrational."

There is no etymology for "acun" which Tamura describes as a fantasy word. That explanation fits well with pieces that are pointedly undefinable. "Acun01" is blend of screeching trumpet and percussive effects with Frangenheim alternating between arco and pizzicato. Both players intermittently approach musicality but those encounters are brief and seem to be more of a reminder of the natural tone and range of the instruments. More typical of Nax is "Acun03" where Tamura creates an effect that is very close to a shrieking, demonic human scream. There are pieces like "Acun04" and "Acun06" that seem to accidently fall into the early development of a melody but they never amount to a full-blown theme.

While there may be some internal attempt to create synergy here, more often than not it appears that neither player is aware of the other's presence. Though Tamura and Frangenheim seem to react to each other through a noise-oriented responses, there is no distinct musical relationship in their playing. Their rejoinders are more bumping around in the dark than call and response. Finding points of differentiation between the tracks on Nax is difficult at best. The array of noises and effects may be great but there are few viable references to cite that would effectively serve as anchors for comparison. It would be an understatement to say that Nax is not for everybody; even those with a taste for more adventurous music may find it difficult to wrap their ears around what Tamura and Frangenheim have created here. That being said, the test of limits that these pieces explore will certainly fascinate some bold and forward-thinking listeners.