Natacha Atlas: A Myriad of Possibilities 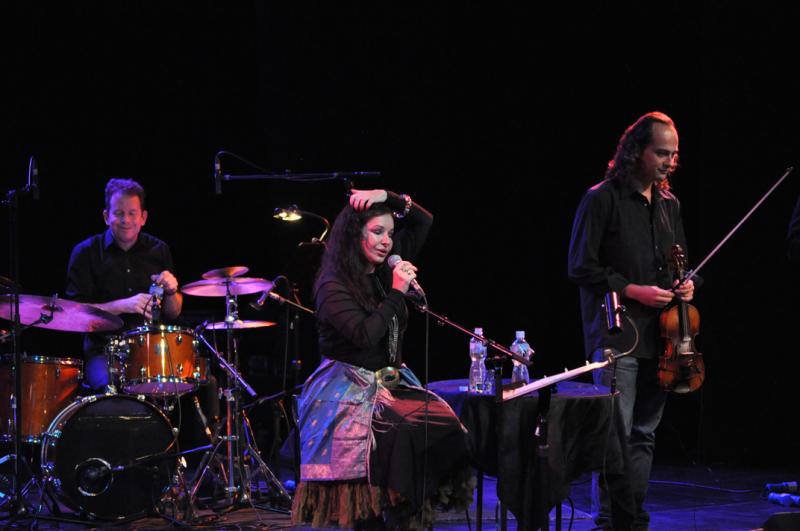 By NENAD GEORGIEVSKI
June 12, 2016
Sign in to view read count
Belgian singer Natacha Atlas' music sits on the brink between two cultures: Western and Eastern. She uses this meeting of sounds to create something unique that takes the best from both worlds. Atlas began her career with Transglobal Underground, a world music and electronic dance fusion act with whom she recorded four albums. The group's unorthodox approach received widespread acclaim and served as a catalyst for furthering fusion between world music sounds and Western electronic dance music. When she left the band she went on to release several solo recordings; their innovative fusion of Arabic classical, electronic and pop music garnered an impressively diverse array of admirers.

Her latest album, Myriad Road has a similar cross-cultural appeal. Produced by one of the world's most interesting jazz artists, trumpeter Ibrahim Maalouf, this record mixes acoustic jazz and funk with Arabic music and further expands her maverick approach to music making. AAJ caught up with Atlas at the Bitola World Music Festival, Macedonia where she premiered the record only days after it was released. Her new sound fitted perfectly with the artistic direction the festival is headed in; welcoming artists that are equally inspired by jazz and traditional music. Her melange of jazz and Arabic music dazzled the people in attendance. After the performance, she took AAJ through the making of Myriad Road, and offered a glimpse into her creative process.

All About Jazz: Could you talk about the creative process and the ideas that fueled the music on Myriad Road?

Natacha Atlas: Basically, it really started with piano and a voice. Ibrahim [Maalouf] and I got together, I had already written some lyrics and then he would start playing some chord ideas and melodies. It sort of developed from there. It started from just piano and voice.

AAJ:Where did the jazz influences come from?

AAJ:Your version of "Riverman" by Nick Drake is one of the first indications of you traversing the road between pop and jazz, and all of that spiced up with Arabic sounds.

NA:Yes, that's a Nick Drake song, but the way that Samy [Bishai] re-harmonized it and the way he approached it was in a very 'jazz' direction, because Samy studied jazz. In fact, he came to Arabic music from jazz first, even though he is half Egyptian and half English and he grew up in Alexandria. But his father and his mother both loved jazz, so he grew up with jazz, listening to artists like Miles Davis and all the jazz greats.

AAJ:Could you talk about the role of Ibrahim Maalouf and how he influenced the record?

NA:He had a very strong idea about who he wanted on the album in terms of musicians. He chose a drummer called Andre Ceccarelli, who is a well-known jazz drummer in France. Ceccarelli has worked with people like Didier Lockwood, who is a famous jazz violinist in France. So, Ibrahim had a very strong idea about what kind of musicians he wanted on the album. Those were definitely in the jazz field and I think he had a more definite idea about it than I did. He had said that he wanted to have the feeling of his album "Wind." That album is one of my favorites and I love that direction. But I actually felt that this one should have a different direction.

Some of the album, to me, has a '70s jazz-funk feel. That was definitely his direction more than it was mine. And then, with a song like "Voyager," I wrote the lyrics and the melody and then Samy wrote the musical accompaniment. He re-harmonized what I'd written. That almost has a sort of a slightly folky sound to it... Ismail [Lumanovski, originally from Bitola] plays on clarinet. He is just fantastic because that's the part when he plays it, that's the thing that brings it home to me in a way. It brings it back to familiar ground.

Samy and I wrote "Ya Tara." The jazz style that comes through, it is sort of ballad like for me. It's like Chet Baker with the drums having a more 'jazz' approach. I really like that because for me it really is a cross between an Arabic ballad and a jazz ballad.

AAJ: The vocals are the most indicative aspect that this record is a meeting place between jazz and Arabic music. The singing is jazz but the phrasing is Arabic.

NA:Yes, and the melody is very close to jazz. There is a quarter tone in it. You can actually sing it without the quarter tone. You can do it straight, but actually, it was written with the piatti [cymbals]. So that is why it really is a cross between jazz and Middle Eastern music with the quarter tone scale being so much a part of it.

AAJ: How do you feel about taking the acoustic route with this record? You began your career as part of Transglobal Underground, a dance band that mixed electronic music and ethnic sounds. Even your own recordings have that electronic background to them. So how does it feel to be playing acoustic music for a change?

NA:It started in 2007 actually. I met a guy who was a musical director who mainly worked with choirs. He played piano, and my first acoustic album "Ana Hina" had some old songs, like Fairuz [a Lebanese singer] songs and [Egyptian singer Abdel Halim] Hafez songs, and we did it in a slightly Gypsy, slightly jazz way, and it was acoustic. This guy, Harvey Brough, was the one who basically said 'we can do this acoustically and it's a very different direction for you.' And I wanted to try it.

That was the first time I played with jazz musicians. For me, that was a real revelation because I came from that sort of electronic and Arabic pop side, and that was a great experience especially when I was new to being on stage. It was an adolescence in music and Transglobal Underground was just a fun adolescent thing. None of us really knew what we were doing. We were just experimenting.

By the time, I met Harvey and the acoustic direction came into play, I was more mature and I knew more about music than I did when I first started. We were just having fun, you know. When I first started with the electronic pop thing I just wanted to make music that was about my two identities. I wanted to make music for people like me, who were of mixed cultures. And then, by the time I got to "Ana Hina" I wanted to do old songs in an acoustic way but have a slightly 'jazz' influence and do them in a way that everyone can identify with. So, for instance, I did a cover version of "Black is the Color of My True Love's Hair," which is a folk song that Nina Simone has done a version of. I wanted to put a little bit of my identity in there, the way that I sing. I think it was a successful cover version because people really like it, but they like it because it is a bit different.

And then I did songs like "La Shou El Haki," which is a favorite. This still has a fusion thing about it. For me, I felt that there was this acoustic direction and the jazz direction had a lot of doors that could be opened. That's why I guess I stayed there. I stayed in that sort of direction.

The only time I deviated from that was when Samy and I did this music for a modern ballet, a contemporary dance and it's called "Le Nuits" and the choreographer is Angelin Preljocaj, a famous French choreographer, who tours all over the world with his ballet company. He asked me to compose the music for this ballet, so I did with Samy. This album is a fusion of electronics, sound design, contemporary abstract music with a Middle Eastern style and some jazz. I did a new cover version of "It's a Man's World" in an acoustic jazz style and then I did some really abstract sound design music, which is very easy but very electronic. It is much more abstract than anything I have ever done since Transglobal Underground, because it is for contemporary dance. Sometimes they just want really weird sounds and an impression of street sounds or Middle Eastern sounds.

So Samy and I had a lot of fun with this album and it was great for me because I got to compose. My voice is not on every track. Sometimes I have ideas in sound design or I have ideas for what the cello should do. Things like that. I can compose in a different way than actually just always singing. Sometimes I can compose for another instrument. So, I had a lot of fun with this album. I think probably some of it is very strange because contemporary dance is sometimes not about music really. It's about strange noises and movements. But it was fun to do that as it was a different kind of experience. For me, it was very enriching because it showed how music can be used in other ways.

AAJ: What does the title refer to? It's a strange combination of words.

NA:I know. For me, I guess, Myriad Road, it's in the lyrics of the song "Voyager": "a myriad road are the roads that are left behind." But for me what it meant was that there are myriad of possibilities. We are all voyagers and we all come to intersections where we have several choices to make about where we go and what we do next. To me, that's the myriad road. Sometimes we think if we take this road and it doesn't go right then it could ruin our future for many years. I always wondered whether that's actually true, whether it's us, or it's just our fears that are blocking us. The myriad road is actually the same road. The roads before you are the roads behind you.