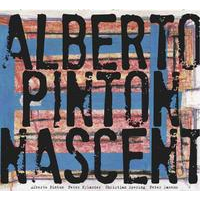 Italian multi-woodwind specialist Alberto Pinton earns his living in Stockholm. Spanning the past several years, and via the level of band support he receives, it reaffirms that there's no shortage of world-class talent in Sweden. Pinton's muscular and hard-driving presence on clarinet and baritone saxophone signals a program that largely smokes, other than when he tempers the modalities with raspy flute work, evidenced on the buoyant jazz-waltz vamp, "Clean Slate." The leader bridges boisterous levels of ultra- modern jazz with freeform passages, sprightly bop themes and jazz-fusion metrics.

Electric guitarist Peter Nylander adds bite, sizzle, and is an admirable foil for Pinton's aggressive stylizations, complemented by a touch of echo during several movements, adding depth to the scope of attack. The guitarist's dark-toned and rather ominous phrasings cast an edgy perimeter as Pinton molds mainstream concepts with wily, nouveau song-forms, often modeled with climactic blows and, on occasion, a smidgeon of shock-therapy. However, the tide turns on "Nu," where Pinton picks up the melodica to cast a hymnal vibe, delicately treated by Nylander's subdued voicings and drummer Peter Danemo's flourishing rolls and cymbals hits. But the locomotive engine revs back up on "Canto," launched by the drummer's airy patterns and Pinton's blazing choruses.

It's clearly noticeable that the musicians draw upon their intuition and synergy to get the job done. It's not simply a blowing fest, because Pinton's compositions contain hooks, melodies and sustainable thematic underpinnings, but when the band engages in its torrid dialogues, it's time to fasten your seatbelt.