By NENAD GEORGIEVSKI
August 25, 2016
Sign in to view read count 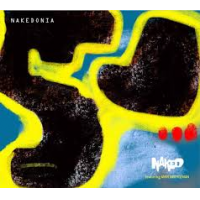 There are bands that inhabit different territories at once where they don't belong to one genre but to many. A band like Naked can seem notorius for daring to ignore boundaries between genres and as such it can't really be pigeonholed as jazz. As a matter of fact, the band can describe itself in the same manner as the band Get The Blessing describes its music —"jazz, not jazz" as they are floating in a sea of melodies and grooves.

Nakedonia is at the same time cinematic an playful with its mesmerizing melodies and grooves, inflused with a healthy dose of humor. As a result, it consists of tightly written, melodic jazz -folk-rock songs spiked with a dose theatre music. While the odd combination of bass, drums, violin and whole range of wind instruments may not seem like an obvious place for starting a juggernaut as playful as this, but the band interacts beautifully and it builds layers of melodies and rhythm. "Cempresi" is driven by a serpentine melody over a Dixieland —like rhythm, while the follow up "Obori!" is a playful track sounds like a flashy, caffeinated jam.

On "Raduj se," the drummer tautly battens down the groove which propels the arid saxophone lines that moments sound annoying an unnecessary. The title track is a joyful folkish song where the band swims like a fish in water. Obviously, they are better fitted to be playing this sort of Serbian folk/Jewish like melodies than jazz. If it wasn't for the drums, "Green Little Eyes" would have been a perfect theatre music as the myriad of percussion sounds and the melodic clarinet lines intriguing and enchanting soundscapes. Along with "Nakedonia" it's one of the album's standout tracks. "Stozer- -Scream for Peace" is a blast and the band sounds like the Klezmatics on steroids.

As a whole, Nakedonia is a high point in Naked's decade long career. On the flip side, while the band is infused with enthusiasm and ideas including skills to match, what hinders their work is the lack of adequate production that would showcase more of the band's various dynamics and subtleties in full light. The end result is an album that straddles several worlds and a fun listen.