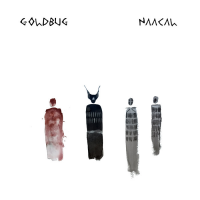 When thinking of ancient civilizations, it's natural to start with, say, Sumerians or Egyptians. The Naacal aren't exactly first to leap to mind—not least because nobody knows if they actually existed. There was a certain amount of creative license in the earliest writings about pre-Mayan people in Central America and the lost continent of Mu. Barry Meehan finds the idea fascinating all the same, though, and those musings provide a central textural theme for this improvisational electric-acid-avant-jazz outfit on their exciting second outing.

That's not really to say it's a musical throwback. Naacal is unmistakably a present-day endeavor—Tim Motzer's guitars wail with all the tones, effects and voltage of a particularly weird Krautrock outfit. The affair is sprinkled with samples and sound effects in the experimental tradition of recent decades. Meehan's slinky electric bass would be at home in a jungle-trance outfit or Bill Laswell collective. Still, some exotic scales give the melodies an interesting old-world edge, while the quartet uses their instruments and found sounds to create an earthy vibe with a feel of great age and mystery.

Where the tracks were often spliced and diced into a bewitching murky soup on The Seven Dreams (1k, 2010), this release features more of the quartet's improvisations from buildup to crescendo. Or rather, trio-plus-one improvs might be the proper description—Meehan, Motzer and frisky rhythm-slinger Eric Slick held their sessions jamming as a power trio before Theo Travis (based in the UK) added his reed parts later. Nonetheless it still features a sparkling chemistry, if in an unusual way: the others give him plenty of space with interesting things to respond to, and his contributions are never less than inspired.

Dynamics patiently build and crest through gripping extended blows such as "UNXP" or "Source Code," while other spots may coast on abstract ambience or subtler motifs that recede without revealing all their secrets. You can't pin it down to rock, jazz, world-beat, or whatever imaginary musical forms mythic peoples might have had in prehistoric times. Naacal is a journey of the mind that touches on all those things and spins them into something one of a kind.