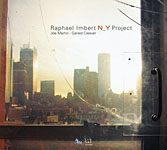 Bookending eleven of your own tunes with Duke Ellington's "Echoes of Harlem" and John Coltrane's "Central Park West" is a bold decision for any jazz musician to make—it's a confident statement and a risky one. On N_Y Project the decision pays off—saxophonist Raphael Imbert's compositions have their own strengths and innovations, ensuring that they stand such close comparison. The Marseille-based musician and the New York-based rhythm section also demonstrate some strong playing across this exciting collection of songs inspired by the Big Apple.

"Echoes of Harlem" opens the album in a joyous, upbeat, mood. Joe Martin's bass and Gerald Cleaver's drums create a full, rich and warm rhythm over which Imbert launches his crisp and firm-toned sax sound. Imbert deliberately fashions a contrasting mood with the second tune, "Lullaby From the Beginning." The tune's arrangement is sparse and delicate, with Martin and Cleaver playing simply and with restraint. Imbert's own playing, on soprano, is beautifully emotive.

"Albert Everywhere," a tribute to Albert Ayler, is also characterized by delicate playing and a sparse arrangement and creates a similar mood to that of "Lullaby From the Beginning"—albeit with a freer, more avant-garde feel. Elsewhere, on tunes such as "My Klezmer Dream" and "Cloisters Sanctuary," Imbert's arrangements result in a much fuller sound and greater drive in both rhythm and melody.

"Struggle for Manhattan's Life" is far from the downbeat composition the title suggests. Instead, the musicians conjure up images of the frantic to and fro of life in Manhattan in a much more optimistic way, the opening fractured and angular playing gradually coming together to create a strong, fluid groove in the latter third of the tune, with Imbert seemingly playing soprano and alto at once. The feel is one of celebration and lust for life, rather than struggle. The track moves imperceptibly into "NYC Breakdowncalling," as Imbert continues to play dual saxophones with the same frenetic pace and power. Things calm down midway through, however, as if Manhattan itself is settling down and starting to relax.

The inspiration for N_Y Project came from a 2003-04 study trip Imbert made to New York. Researching in archives during the day and immersing himself in the jazz scene by night enabled Imbert to gain an understanding of the city and its jazz heritage. Meeting Cleaver and Martin allowed Imbert to develop the collaboration that comes to fruition on this album—a powerful and evocative collection of tunes played by a masterful trio.