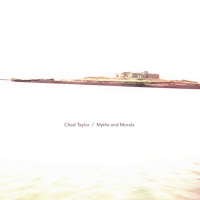 In the beginning of it all: one sound, one language, but then there was the fall of Babel. One tongue turned into many. Difference became a reality and a way of exclusion. A myth can both unite and exclude like morality can judge and misjudge. The past becomes separated from the present and the future is already on the horizon. How can one find a way back to that unity of space, music as the beating heart, the breathing lungs? Perhaps, the way to go is to embrace difference in unity. This is what Myth and Morals, the solo drum record from Chad Taylor, is about.

Solo drum records by their very nature are special because they are so rare. A case in point, for a long time, educator, drummer and composer, Chad Taylor, has been one of the most prolific drummers in modern jazz, but Myths and Morals is his first solo drum recording. It is indeed a special solo recording, but it is more than that. Think of it as a movie or a journey through different sequences. A narrative, with pauses and new perspectives.

The thing about Taylor's drumming is that it is so incredibly tactile, but don't ask him how he achieves the wealth of shades in the cymbals from a technical point of view. As he revealed in an interview here on AAJ, he could explain it, but he prefers not to do it. Instead, like another significant drummer, Hamid Drake, it is about presence, feeling and reaction.

The music develops organically and the difference between composition and improvisation is blurred. The punctuation is so perfect that it must have been thought through, but maybe it is a mistake that makes it sound natural and perfect. The drum is in a dialog with the mbira, a spiritual instrument. Somehow Taylor succeeds in creating a space that is both in and outside time.

Each part of the record is a piece in the puzzle and yet stands on its own. For instance, "Phoenix" is a composition with its own narrative arc, and "Abtu and Anet" has the kind of sample-worthy rhythm that goes into the body and blood. New musical meanings are added to the whole to enlighten the bigger perspective of the album. This is a musical strategy, but there is also an ethical perspective in embracing difference.

Myths and Morals is a lively dialog with the vibrant sounds of the world. The music acknowledges the masters that have been here before while searching for new sounds in a languge that is both personal and universal.