By HRAYR ATTARIAN
November 23, 2006
Sign in to view read count 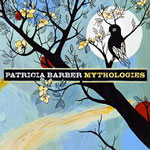 Poetry and music are two peas in a pod. For the past two millennia the Roman poet Ovid has inspired artists of all kinds, from poets and playwrights to filmmakers and musicians. Most recently, his timeless tales served as an inspiration to Patricia Barber, who is an accomplished musician and a poet in her own right.

Listeners who are familiar with Barber's work tend to expect thought-provoking lyrics, complex composition, innovative improvisation and sensual vocals, and this CD is no exception to the rule. Various characters from Ovid's metamorphosis serve as an inspiration for each song, but the lyrics and the music are commentaries on contemporary social, political and environmental issues. Both the music and the lyrics vary in style from one song to another, reflecting the various moods and ideas expressed by each character.

As always, Barber surrounds herself with talented musicians who bring their own fresh ideas and innovations to the material, making the whole much more than the sum of its parts. The music here is less introspective than her previous releases, and so are the lyrics, but Barber's delivery of the songs is impeccable. She has mastered the art of singing and her breathy contralto breathes life into every word.

This time around, however, the emphasis is not so much on her piano improvisation, but more on the ensemble playing. This is, however, only a small disappointment in an otherwise very rewarding disc.

Mythologies is the kind of recording that grows more interesting with each listen, and the poetry woven into the music attests yet again to the timelessness and universality of both forms of expression. This release is another excellent addition to Patricia Barber's discography and an oeuvre worthy of Ovid's legacy.