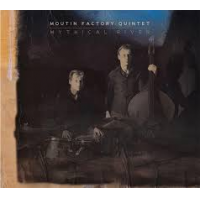 Not so long ago, fresh off a two-week tour that stretched along the path of the Mississippi River, the Moutin Factory Quintet took to a Paris studio to record the material that would come to constitute this album. Drawing inspiration from those mythic waters while stylistically keeping a good distance from sounds that emerged from its depths previously, bassist Francois Moutin and his drumming brother, Louis, put together a program that's bold, bracing, and thought-provoking in nature.

Opening with the slamming grooves and unnerving lines of "Forward," the brothers hint at the blues while filtering it through a varicolored lens. They follow that introductory offering with a trio of pieces originally composed for No Human Is Illegal, Richard Ledes' 2017 documentary about refugees detained on the Greek island of Lesvos. There's an eerie resonance to be found in saxophonist Christophe Monniot's mournful sopranino sighs and guitarist Manu Codjia's well-matched textural designs on "No Human Is Illegal"; a resolute blue streak in the John Coltrane-indebted wilds of "Fight And Anger"; and a mournful air on "Tears And Despair." Taken together, they form a triptych addressing broader implications in light of the world's many refugee crises and their subsequent responses.

Stepping away from a cinematic realm, the music remains compelling and fresh on its own terms. "Summer Twilight" delivers some offbeat groove play and searing guitar, "Echoing" highlights the contributions of pianist Paul Lay, "Wayne's Medley" leaves it all to the Moutins, and "Blessed and Cursed" taps into a cooler vein while putting François' active bass in a central space. This river is most certainly wide, reflecting the boundless reach of brotherly bonds.