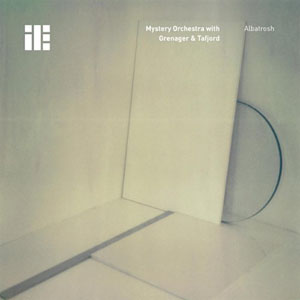 Duos can represent a double-edged sword: on one hand, no other context is as intimate, where the level of communication can be as deep, the lines of communication so open; equally, however, there are the inherent limitations on its possible sound worlds, the result of the specific textural, harmonic and rhythmic capabilities of the instruments involved. Still, through the use of preparation and extended techniques, Norway's Albatrosh managed, with its 2009 debut, Seagull Island (Inner Ear), to expand on an existing tradition of improvising sax/piano duos that hearken back to classics like Dave Liebman and Richie Beirach's criminally out of print Forgotten Fantasies (Horizon, 1975). Not that saxophonist André Roligheten and pianist Eyolf Dale sound anything like their predecessors; since first encountering Albatrosh on a 2008 trip from Bergen to Stavanger—the two, having just graduated from university and still unrecorded—it's been patently clear that this improvising duo has plenty to say, in ways that continue to belie their young age.

Mystery Orchestra with Grenager & Tafjord expands on Seagull Island's mix of form and freedom, documenting an expanded group that, featuring cellist Lene Grenager and French Hornist Hild Sofie Tajford—members of the free improvising group Spunk, last heard on the fearless Kantarell (Rune Grammofon, 2009)—was heard in performance at Kristiansand, Norway's Punkt Festival 2009, exactly one month before heading to Oslo's legendary Rainbow Studio to record this set of original compositions. Split down the middle by Roligheten and Dale, the music benefits both from more time together as a duo, and the quartet's expanded palette and intimate chamber implications.

The group may be larger, but some of Mystery Orchestra is, if anything, sparer and more beautiful. With Grenager handling the low end, the eminently singable melody of the gentle, waltz-time "Hansen's Stroll" dissolves into complete spontaneity, though with Grenager's bird-like, upper register harmonics, Roligheten multiphonics and Tajford's equally out-of-the-box timbral thinking, it's the freedom of calming stasis, as Dale returns with a gradually coalescing, arpeggio-driven pulse and improvisation that skirts the edges of specific delineation. Elsewhere, on "Derrick At P1," where Grenager and Roligheten—slap-tonguing his bass clarinet—carry the pulse, Dale and Talford's soloing is more overt, despite being passed between Dale and Talfjord, seemingly at will.

Hints of greater extremes pop up throughout a disc where the writing ranges from almost transcendental beauty to the same playful humor that imbued parts of Seagull Island, with Dale coyly and subtly quoting Prokofiev's Peter and the Wolf, as the band returns from the ether.

Classical music, in fact, informs the 50-minute set as much as the jazz tradition, with the augmented Albatrosh, at times, occupy a space similar to trumpeter Dave Douglas' late 1990s string quintet. As Roligheten and Dale continue to hone their collective voice, Mystery Orchestra with Grenager & Tafjord represents further compositional growth for these two young players, and a rare capacity for retaining the near-naked intimacy of a duo, even in the more expansive context of a quartet that brings its own definition to the term "chamber jazz."