Myself Among Others, A Life in Music 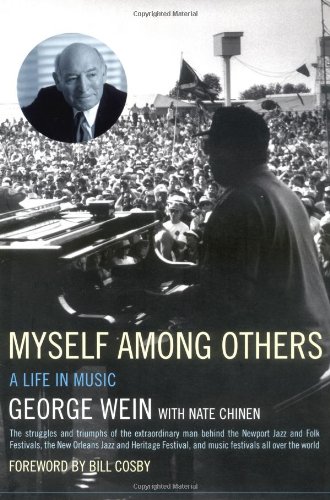 George Wein started playing piano during his youth and went on to become one of the most important figures in the music world. His playing, though, wasn’t what brought him to prominence. Make no mistake about it, he’s got plenty of talent in the music department, but his love of jazz and desire to promote it proved to be the real key to his success. Wein is the man responsible for the Newport Jazz festival, Newport Folk Festival, New Orleans Jazz and Heritage Festival, and many other equally-important venues.

With Myself Among Others, A Life in Music, Wein, along with noted jazz writer Nate Chinen, details his fascinating journey. He went from an average middle-class life in Boston to ultimately becoming the foremost jazz festival impresario. This alone would pique practically any jazz lover’s interest. As the title suggests, though, there’s more involved than simply autobiographical material. Wein shares the stage with those who helped bring him such success. Admittedly, the cast of characters here deserves attention. He’s worked with artists ranging in scope from Sidney Bechet to Led Zeppelin.

Much of Myself Among Others, however, focuses on the bringing the overall scene to better understanding. One of the photographs, for example, shows Miles Davis at Newport. Wein stands behind him, almost obscured but still visible. This exemplifies the overall tone of this book. Here, the reader catches a glimpse of a larger picture than straight autobiography generally offers. Wein shares his experience in creating culturally-important experiences.

Of course, Newport serves as a major drawing point here. Any in-depth study of jazz music definitely needs to pay attention to the Newport Jazz Festival. Generally speaking, any mention of Newport, brings two events to mind: Duke Ellington’s performance at the 1956 festival, which featured the legendary saxophone solo by Paul Gonsalves, and Bob Dylan’s appearance at the 1965 Newport Folk Festival, when he shocked the audience with his electric performance. As important as these events are historically, they simply form part of picture.Therefore, it’s not surprising that Wein has plenty of other tales, which prove equally compelling.

Through it all, Wein maintains an alliance with the artists. He understands musicians and knows hot to get the most from them. He does this with patience and respect. His story definitely has its share of ups and downs. Due to his tenacity and undying spirit, though, the ups always manage to come out on top. The writing evokes emotion without getting bogged down in sentimentality. He employs an impressive literary style, proving himself as skillful in the world of print as that of music promotion.

Putting together a festival like Newport would be more work than most could handle. Wein, on the other hand, lives for such challenges. That’s why Newport is just part of his story. He obviously loves music and wants to continue spreading the word. He possesses a drive that should serve as an inspiration to anyone, and shows that nice guys really can win. Just because he’s written an autobiography doesn’t mean he’s slowing down. Let’s face it, the story ‘s far from over. As he puts it, “I have no intention to retire because I’m having too much fun.”