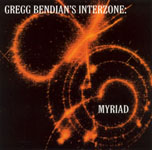 Gregg Bendian's Interzone is a clear case of a thematic project that creatively outdistanced it's originally conceived scope and lifespan. William S. Burroughs' hallucinatory alternate reality remains the group's namesake, but the players continue to move forward in fresh creative directions. Of all the Beat writers (save perhaps Herbert Huncke) Burroughs was arguably the most enigmatic, both in terms of personality and personal history. Bendian brings the writer's mystique to the music and his deviously constructed soundscapes capture the cosmic dislocation and menace of Burroughs' literary creations while still conveying the burnt and twisted synapses of his own frighteningly original creative mind.

Reverse-played loops, fuzz guitar and even fuzz vibes float across the program in a myriad of bizarre combinations. Ethereal tones and timbres stretch and contract in weirdly abstract patterns that hint at familiar reference points, but hover largely beyond a conclusive reach. Other pieces like "Intrepid" and "Drive" have a definitive rhythmic and harmonic base, but still lope along in atypical directions. Liebig's corpulent bass figures, which walk and leap with startling alacrity given their fleshy girth, are the most frequent common denominator for the ensemble. The Cline brothers, who unveil a telepathic symmetry clearly the product of their sanguinary ties, fill out the fringes while Bendian's vibes, set for maximum luminosity, spray an incandescent rainbow of melodic permutations in radiating arcs. The majority of tracks clock in near the ten-minute mark and are rife with chimerically harnessed energy funneled into a myriad of outlets. "Diaspora" is a 13-minute tone poem that unfolds like a dream uniting corrosive slide guitar, creepy vibraphonics, malleted percussion, morose bass and an ample use of space into united whole that perplexes as it placates. On "Sanctuary" the players invite the listener on a psychosonic trip into the interstellar void fueled by back-looped guitar and coruscating percussion. Bendian's universe via Burroughs is an alien place, but those willing to abandon the tethers of preconception are certain to find vantagepoints into the myriad mysteries it contains and be rewarded.