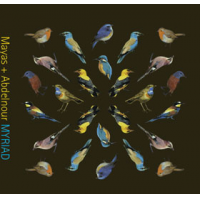 Myriad is the second duo recording by German pianist Magda Mayas and Lebanese alto saxophonist Christine Abdelnour, building on the excellent Teeming (Olof Bright, 2010). Recorded in concert at Météo Festival, Mulhouse, France, in August 2011, Myriad features two tracks with a combined running time under 34 minutes. However, that is not an issue as the music is intense and concentrated enough to make up for the relative brevity of the album.

As always—whether playing together, with others or solo—both Mayas and Abdelnour produce sounds that push at the boundaries of what we should expect to hear from their instruments. Mayas is already renowned for her combination of playing inside and outside the piano, striking a near perfect balance between the two. Abelnour has developed a distinctive playing style—favoring sustained notes and innovative embouchures—which can frequently make her alto sound very unlike a saxophone but does produce some haunting sounds.

Whatever sounds they deploy to produce it, the overwhelming impression created by the resulting music is one of beauty and delicacy. The two do not rush things, instead being very deliberate and restrained so that the music unfolds at its own pace with an appealing sense of logic. Mayas and Abdelnour seem to take the greatest of care with the placement of their notes, as if they are carefully constructing a delicate structure—a house of cards, say—which neither wants to disrupt. Consequently, there is not a superfluous or wasted note anywhere; each one seems to have been played to serve a definite purpose that would not have been served otherwise. The music evolves gradually at a pace that feels both natural and fitting, with smooth peaks and troughs that are never jarring or sudden.

The duo's music clearly shows their experience of playing together; they do not necessarily react to each other, rather their sensitivity allows them to anticipate where the other will go next. Altogether, this is a text book example of great duo improvising and a listening experience that will surely stand the test of time.