By BHASKER GUPTA
September 18, 2006
Sign in to view read count 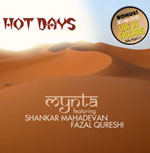 Hot Days, a compilation of fifteen of Mynta's best studio works, spans 25 years and five albums. Though not a "best of" set, it surely is a definitive collection for those not yet initiated into the unique mix of African and Latin-American rhythms, Arabic sounds and Scandinavian folk tradition that Mynta offers.

Few world music ensembles combine the suppleness of Indian Classical with the vigor of Swedish jazz in a more subtle way than Mynta, whose music is fresh, delicate, liberating and smooth. Whenever Indian and Western fusion is mentioned, John McLaughlin's Shakti is the most familiar name. That group was a fusion of instruments, taking Indian classical as the dominant sound, though breaking away from its strict realms of composition to a more improvisational quality. Shakti closely missed being a fusion of two different sounds. The apparent following and regard received by Shakti (with such heavyweights as McLaughlin, Zakir Hussain and Vikku Vinayakram) was well-deserved.

Mynta is a perfect fusion of two very different sounds, emancipating a unique compositional blend of unity and individuality where sounds are intertwined closely, yet each retains a distinct character. It's comparatively a rare band in the world of East-West fusion. Besides having developed an incisively personal style, the band has a concentrated completeness and expressive body of work, each maintaining a consistent integrity, yet subject to seasonal changes that define its coming to age.

The first three songs of the compilation are from the 1988 album Indian Time, one of Mynta's early albums and supposedly the one that would exemplify the group for years to come. The characteristic features here are laid-back rhythmic elements, high levels of improvisation from the entire group, and safe-sided lesser experimentation. Hot Madras, recorded in 1991—a free-bop-styled album, evidently portraying the band's move towards more vigor—is the source of the next three songs.

The next six songs come from Nandu's Dance (1994) and First Summer (1997), considered to be the most experimental albums by the band at its creative heights. "First Summer" is Mynta's signature song, even incorporating rap vocals. Legendary classical vocalist Shankar Mahadevan collaborated with the band for the first time here, and it's altogether a different ride. The last three tracks are from Teabreak (2003), a dazzling experimental entity. Though a surprise to many of Mynta's fans through its incorporation of electronic beats, Indian Classical vocals and heavy bass-laden sound, the album is a perfectionist choice, displaying a group that has come a long way together.

Given the sheer volume of this storied band's recordings, Hot Days introduces us to some, but hardly all, of the main instrumental contributors in the band's history. With a bonus live DVD at Fasching, Hot Days becomes an essential addition to the Mynta canon.