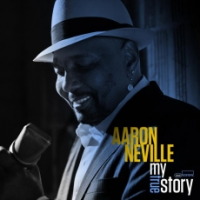 My True Story is New Orleans royalty Aaron Neville's first recording in three years and his first for Blue Note Records. Most recently, Neville has been covering familiar territory with I Know I've Been Changed (EMI Gospel, 2010), Bring It On Home... The Soul Classics (Burgundy, 2006), Christmas Prayer (EMI Gospel, 2005) and Nature Boy: The Standards Album (Verve, 2003). He continues this trend with his sincere and heartfelt homage to doo-wop, My True Story. Like Ray Charles and Van Morrison, Neville has no fear for any genre. He grabs a style by the throat and confidently makes it his own.

The thing that these three giant voices have in common is distinction. Each vocalist possesses a style and approach so uniquely their own that once the lyrics of a standard are vibrated by that voice, the standard is solidly transformed (think of Charles' "America, the Beautiful" or Morrison's "Comfortably Numb"). Neville's voice, that eerie falsetto, is not as scary as Skip James' nor as reckless as Joe Cocker's; still , it can chill or warm, whatever mood strikes the singer. Neville is better in soul and gospel, and passable in jazz, but he speaks the truth when he says that the songs of his doo-wop youth, ..." rode with me, in my bones, through all these years."

The engineering of My True Story (the title a cover of the 1961 Jive Five hit) is decidedly lo-fi, with unadorned drums and keyboards and muted guitars (just identifying Keith Richards in the mix). Neville believes that doo-wop is first and foremost a vocalist's album—a vocalist with harmony vocalists, and the attention should not be diverted. Producers Don Was and Keith Richards see to it that Neville's voice is front and center, as it should be, in the arrangements. Neville is, indeed, in familiar territory when he navigates period doo-wop like The Drifter's "Money Honey" and "Under The Boardwalk," and later songs containing doo-wop in their DNA, such as the Impressions' "Gypsy Woman" and the Ronette's "Be My Baby."

Besides a potent band, Neville is backed by harmony vocalist from the doo-wop heyday: Eugene Pitt of the Jive Five (who co-wrote the title song), Bobby Jay of the Teenagers, and Dickie Harmon from the Del- Vikings. The combination of voices is more than successful in presenting this music in all of its period glory.

Neville remains a treasure of an acquired taste, singing as if in his salad days of "Tell It Like It Is."

Money Honey; My True Story; Ruby Ruby; Gypsy Woman; Ting A Ling; Be My Baby; Little Bitty Pretty One; Tears On My Pillow; Under The Boardwalk; Work With Me Annie; this Magic Moment/True Love; Goodnight My Love (Pleasant Dreams).