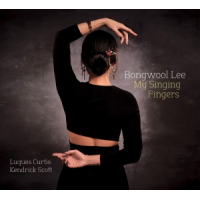 The music of pianist Bongwool Lee has a hopeful feeling. The Korean-born and now New York-based artist drew her first jazz inspiration—after classical studies in her homeland—from the work of Oscar Peterson, who sent much musical time walking on the sunny side of the street. But where Peterson rolled mostly in the jazz standards/Great American Songbook realm, Lee presents, on her debut recording, My Singing Fingers, a set of compelling original compositions. With one exception—the Ray Henderson-penned classic "Bye Bye Blackbird."

The "optimism" observation is drawn from the disc's title tune/opener. Lee shows off a crisp delicacy of touch here, and an accessible complexity of harmony and melody—a mixture of serenity and forward energy inside the deftly-applied and understated turbulence of her trio mates, drummer Kendrick Scott and bassist Luques Curtis. "Sungshin Piano" has a similar calm combined with a lilting brightness, whereas "How's Up There?" takes the sound into the shadows, into varying shades of grey on this (perhaps) mournful rumination.

"Bye Bye Blackbird," the standard, is ever-familiar. Verve Records released a 45 RPM single take on the tune in 1957, by Oscar Peterson. Lee's version sparkles, in a fluid and relaxed way, gathering into a harmonic lushness. "Recurring Nightmare" turns things up to a frenetic level, a dream of being chased by something dangerous maybe, and "After The Black Dog" struts along at a jaunty, rollicking romp.

An auspicious debut, pointing toward a bright future.