By MATTHEW WUETHRICH
July 6, 2004
Sign in to view read count 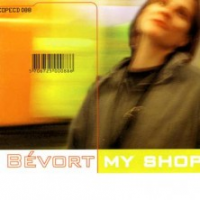 Pernille Bevort’s fifth album as a leader, My Shop, demonstrates the tenor saxophonist’s range of talents. She not only takes all the saxophone solos, but has composed, arranged and written the lyrics. Bevort writes the kind of accessible art songs Kurt Weill did so well, except she updates them for a modern audience with dirty guitars and touches of improvisation.

On the title track, Persson sings the sephardic-tinged melody (a rather obvious choice for a song that wants to sound “mystical”), and lyrics that reflect Bevort’s approach: “The secrets hidden in a shabby bookshelf/old and dusty/it could be a treasure in disguise.” The image of some crowded antique shop fits Bevort’s musical collection of oddities: pop hooks, off-center horn arrangements, swinging pre-bop solos, snappy rhythms.

Bevort’s horn charts follow the spirit, but not the style, of Gil Evans—luxuriant harmonies colored with strange sonorities, flute, clarinet and bass clarinet, saxophones merging in dreamy clouds. “Daydreaming” contrasts the rounded woodiness of the bass clarinet with flute and saxophone, achieving a drunken balance. “In My Dream” opens with an extended horn-only statement, and then falls into a mild bossa nova feel, albeit a bit more jagged.

The bossa nova surfaces again with a version of Jobim’s “Quiet Nights.” On “And in the Meantime” the popular rhythms continue with a blues-funk, guitar driven verse, but not before a cinematic, sci-fi opening. The guitar warbles therimin-like; the horns vocalize freely then mutate into a buoyant bop melody. Later, Bevort piles on the eclectic touches with a Coleman Hawkins-flavored tenor solo.

At a time when record companies are pushing a new breed of supposed "mature" singer-songwriters (see Cullum, Jones), My Shop offers what they are lacking: intricate arrangements, open-ended lyrics and more muscular rhythms. Bevort does not limit herself, making for an album full of little surprises.

My Shop; Daydreaming; In My Dream; And in the Meantime; Cat Club; Kittens; Pigeons Fall; Power Peach; Quiet Nights; Song for Barrel Organ