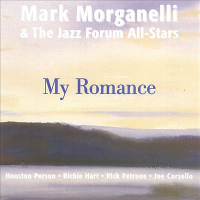 If you like your jazz straight-up and swinging, chances are you’ll get a kick out of My Romance, recorded by trumpeter Mark Morganelli and the Jazz Forum All-Stars at a series of concerts in New York state in July ‘02. There’s nothing terribly innovative here, but Morganelli and his mates, including tenor saxophonist Houston Person, are loose and resilient on a program of familiar standards and one jazz evergreen each by Miles Davis and Duke Ellington.

Morganelli’s bright, clear tone and lyrical temperament bring to mind Joe Newman, Randy Sandke and Joe Wilder with traces of Warren Vaché and even Chet Baker surfacing from time to time, while Person invokes Stanley Turrentine, Red Holloway, Grover Washington Jr. and other proponents of soul/funk/fusion. The rhythm section—guitarist Richie Hart, bassist Rick Petrone, drummer Joe Corsello—is unruffled and economical, strengthening the front-liners without getting in their way. Hart, from the Jim Hall/Howard Alden/Joe Pass school, has a number of handsome solos as well. Petrone has a rich, warm sound, and Corsello is particularly adept with brushes.

While I can’t say that every tune is among my personal favorites, a few are, including Rodgers and Hart’s earnest title song, Victor Young/Ned Washington’s “Stella by Starlight,” Jerome Kern/Oscar Hammerstein II’s “All the Things You Are” and Bronislau Kaper/Ned Washington’s “On Green Dolphin Street.” Miles is represented by “All Blues,” Duke by “In a Mellow Tone.”

The overall sound is commendable, especially for sessions recorded live, while the 73-minute playing time speaks for itself. A pleasant album of mainstream jazz that won’t knock your socks off but is sure to leave a smile on your face.

My Romance; All Blues; I've Grown Accustomed to Her Face; Stella by Starlight; The Girl from Ipanema; In a Mellow Tone; Days of Wine and Roses; All the Things You Are; On Green Dolphin Street.