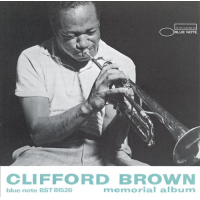 And now it's time for a personal pet peeve, something far worse than a squeaky sax or a fumble-fingered pianist: The mislabeled CD.

Let's start by noting that this is a terrific record—recorded in 1953, released in 1956, shortly after Brown's tragic death in a car crash at age 25. This is early Brown, the great hard bop trumpeter, on the verge of stardom. It's a 4-star record that might be even better if only I knew the names of the songs and who's playing on them!

I got this cheap on Amazon—just $1 used. Hard to complain about the price, and it arrived in good shape, with 18 tracks recorded in two sessions. Both sessions feature Brown, but one includes Gigi Gryce, Charlie Rouse, John Lewis and Art Blakey. The other includes Lou Donaldson, Elmo Hope and Philly Joe Jones.

But which band plays on which tracks? Wish I knew.

The back cover of the CD says this is the 1989 release of this album, and it lists all 18 tracks, starting with two takes of "Wail Bait." (You gotta love the punny title.) But wait—I listen to the first two tracks and they are clearly not the same song. I skip to tracks 5 and 6, supposedly two takes of the classic "Cherokee," according to the CD cover. I know this tune, and neither track 5 or 6 is it. And hold on—tracks 4 and 5 are clearly different takes of the same tune, but the back cover says they are different songs.

Wait... what? Time for some detective work.

Maybe someone put the wrong CD in the case. I check the CD itself, which also lists the tracks. It's the same list as the back cover. No help, but at least it's consistent.

I check online. The Blue Note Discography Project shows the original track lineup for this album. It shows 10 tracks (without alternate takes) in a very different order. First five tracks by one band, next five by the other. Not helpful.

Amazon shows a different CD version with a different track list, with 18 tracks. Good. It says "Cherokee" is track 13. Uh, no it's not. It says tracks 4 and 5 are different songs. Um, not really.

Mystery solved. Now I know which tracks are which—and who plays on each one.

Still a great record. Not the all-time best Clifford Brown—check out the Clifford Brown-Max Roach sets for that—but still this is very good hard bop.

Even so, no jazz fan should have to play Sherlock Holmes to get the complete lowdown on who's playing what. Sure, it's a pretty old album, and a 1989 release, but still... Blue Note, take note.