Troels Jensen and The Healers feat. Miriam Mandipira: My Love

By CHRIS MOSEY
September 28, 2017
Sign in to view read count 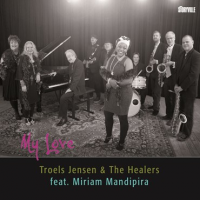 After studying music in her native Zimbabwe, Miriam Mandipira moved from that unhappy country, first to South Africa, then 10 years ago to Denmark. Here she became a mainstay of the local blues scene. Her influences, she said, were Ma Rainey and Bessie Smith but she sounded more like Aretha Franklin and Randy Crawford and still does.

On this album she gets together with veteran Danish bluesman Troels Jensen. He started out playing trad jazz on cornet but under the influence of Robert Johnson and Blind Willie Johnson, switched to guitar.

The sleeve note says "Miriam Mandipira combines the voices of the past with the sound of today, telling her own story."

Such an approach may too often turn performance into a strictly academic exercise. Jensen has tried to escape the trap with a program of original numbers, the majority composed by himself.

He and other white rockers are dogged by the question, "Can whites sing the blues?" It has never, ever been satisfactorily answered. For those of us who saw him when the Rolling Stones were starting out, Mick Jagger sounded (and still sounds) like a Richmond art student imitating Muddy Waters but we've grown used to the anomaly.

On the opening number on this album, his own "I'll Keep On Walkin,'" Jensen growls "I'm a blues man, baby, blues made (?) to the bone." Just as the rest of the world has come to believe in Mick Jagger, so Danes believe in Troels Jensen.

Mandipira? She is black, even if she has nothing to do with the Deep South, and two of her numbers, "Blame Me" and "My Love" do indeed roll along "like a well-oiled freight train," to quote the sleeve note.

Jensen's tribute to Blind Willie Johnson is an adaptation of that tragic blues man's classic "You'll Need Somebody On Your Bond." He follows it with a number he wrote in Spanish, "Habanera De Los Ninos," inspired by watching Cuban children dancing with their grandparents. It has nothing to do with the blues, but he gets full marks for originality and linguistic ability.

As for the rest of the more genuinely bluesy numbers, despite all the moaning and groaning and vamped-up enthusiasm, they never really take off, no matter who is handling the vocals, though there's some nice guitar here and there.

I’ll Keep On Walkin’; Blame Me; My Love; Ode To Blind Willie Johnson; Habanero De Los Ninos; Look This Way; Since I Fell For You; I Need Somebody Bad; You Are My Cocaine; Night Life.