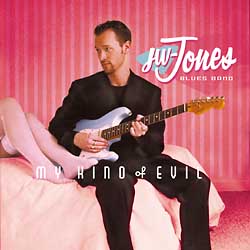 Blues and boogie never went out of style. Bands such as that of J.W. Jones continue to explore the kind of hip-shakin’ excitement that long ago brought Elvis into our lives. Their original program combines early rock & roll with contemporary blues and swing, with a lot of earth-shakin’ goin’ on.

His fat guitar sound gives Jones a leg up on the competition. And what competition would that be? Swinging guys who follow in the footsteps of Jerry Lee Lewis, for starters. Of course, you can tell that he’s been influenced by some who crossed over between blues and pop and back: Ray Charles, Fats Domino, Little Richard.

J.W. Jones and his band are a young organization. The band was formed in 1998. Based in Ottawa, it features a top-notch horn section (the Wind-Chill Factor Horns) and an enthusiastic leader who knows his way around a guitar. The piano and organ accompaniment set up by Geoff Daye gives ‘em a considerable lift. Jones, 23, supplies fire through his expressive guitar solos.

“Code Blue” and “Slow Down,” both swing instrumentals, show off the leader’s expressive guitar language. The latter number, filled with interesting jazz quotes, features powerful solo work from Daye and baritone saxophonist Frank Skanga. In this band’s care, the original piece swings as if Monk had written it.

Jones sings with a down-home, boy-next-door manner. Unlike the charged-up situation that he creates on guitar, his vocals lay low and stay coolly unemotional. When he sings “I might as well be dead” on his original blues “Aching Pain,” you get the purpose behind his style right away. After all, that’s how the blues started out. Relaxed vocals would be coupled with forceful guitar and harmonica adventure to express emotion. Guest artist Kim Wilson supplies the harmonica melodies on this one and on a few others. He sings “I Don’t Know” and “Blue Monday.” Guest Colin James sings “What You Do to Me” and “You’ve Got Me Where You Want Me” with a veteran’s pride. The latter arrangement gives the album its high point. James sings it convincingly, Wilson adds complementary blues harp phrases, and Jones leads his band in a firm setting that marks him as an up-and-coming bluesman with a lot on the ball.

Visit JW-Jones on the web.

Shake That Mess; What You Do To Me; Ain