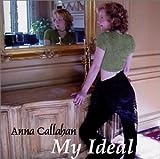 There aren’t many musicians who can do as many things as well as Anna Callahan. And she’s young and pretty too! Callahan not only sings and plays trumpet and flugelhorn, she wrote or co- wrote five of the eleven songs on her debut album, My Ideal, and arranged them all.

If I say I’d rather hear her play the trumpet than sing, that’s not meant to disparage her vocal talents — I’d say the same about Chet Baker or even Louis Armstrong. The truth is, however, that I hear too much Diana Krall in Callahan’s coquettish singing style, and while she’s nowhere near Krall in terms of name recognition, she’s right alongside her better-known contemporary when it comes to provocative poses, as a glance at the album’s booklet and tray card will affirm.

I’m far more impressed by Callahan’s trumpet playing, which draws its inspiration from Baker and Bobby Shew, among others, and especially her songwriting, which is well above what one usually hears from newcomers these days. The tunes are charming, and the lyrics to four of the five actually make sense (the other, “O Woe Is Me,” is essentially ludicrous, with such rhymes as “no more to see your cautious eyes and laughing hair” and “no more to taste your smile so fair” that sound as though they were dropped in simply because they matched the meter and Callahan was unable to come up with anything more creative).

As a singer, Callahan, who has taught vocal jazz at Cal State University-Los Angeles, is artfully seductive and smooth as butter but I wish she’d resisted the urge to transpose “hideaway” into “hi-e- i-e-hide-away-ay” on “My Romance.” She has enlisted a first-class backup crew in guitarist Barry Zweig, bassist Rick Shaw, drummer Jamey Tate and especially pianist Karen Hammack who deserves an album of her own. Callahan deserves another album too, but next time with more trumpet and less voice please.