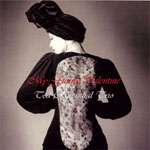 In a skittish music industry where labels increasingly blur their identities and grab at gimmicks just to stay alive, it's reassuring to know that Venus Records continues to produce high-quality, straight-ahead jazz. Based in Japan but recording mostly in New York, Venus has a longstanding, signature focus on documenting the world's best piano trios, and My Funny Valentine is no exception.

This project was conceived by leader Ted Rosenthal as an instrumental tribute to singer Helen Merrill, who has long been a huge star in Japan; together they have performed many of the tunes on this CD, including "You'd Be So Nice to Come Home To," which was Merrill's first and most beloved hit (her 1954 Emarcy eponymous album on which it arrived was voted "best album of the past 50 years" in a Japanese magazine readers' poll).

Like virtually every Venus artist, Rosenthal and his colleagues—bassist George Mraz and drummer Al Foster—are world-renowned players with impressive pedigrees who are at the absolute top of their game. Given the label's famous preference for familiar standards in traditional arrangements, the challenge is to play them with both respect and creativity.

This trio rises tunefully to that challenge with soulful romanticism, a dash of mischief, and the highest level of seamless interplay. Between Rosenthal's fluid eloquence, Mraz's deep lyricism, and Foster's subtly propulsive accents, they give new life to classics like "Alone Together" and "Softly As in a Morning Sunrise." My Funny Valentine offers seventy minutes of pure mainstream jazz, with an emphasis on luxurious ballads. This CD is so melodic that you can even play it for people who claim to dislike this music. It may even convert a few.