Dionne Warwick: My Friends and Me 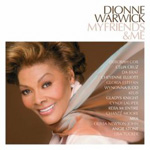 Primarily known as the soft, supple voice in front of so many classics written by Burt Bacharach and Hal David, Warwick here enters the popular "Duets arena by revisiting most of that catalog in the company of other female artists. It took more than "Wishin' and Hopin' to transform this concept into a worthwhile listen (though that song bubbles with Olivia Newton-John's still-adorable voice); some solid singing from some surprising, distant corners of the pop realm did.

It opens and closes with a bow toward Latin music, as Gloria Estefan carries her blues like a burden in "Walk on By while "Do You Know the Way to San Jose receives the most dramatic facelift, transformed with Celia Cruz into a six-minute Latin carnival that explodes with familiar colors and rhythms on piano, percussion, and trombone.

Gladys Knight throws the full power of her gospel/soul background behind "I'll Never Love This Way Again, raising the roof with her final chorus; in contrast, like a seasoned prize fighter, Warwick more discriminately picks her spots, treading wearily yet wisely through the line "A fool will lose tomorrow reaching back for yesterday as if she truly knows in economical and almost half-spoken, conversational yet emotive phrasing.

Reba McEntire graces "I Say a Little Prayer with down-home country-gal charm, snapping off her lines as sugary and sharp as a fresh piece of mint chewing gum. The McEntire track is nicely programmed to lead right into "Anyone Who Had a Heart with Wynonna Judd. On this set's darkest, most melancholy and perhaps most meaningful track, Judd finds strength through enduring the pain of the lyrics. Wisely, Warwick lets Judd carry most of the emotional and musical weight.

"Close to You (with Mya) and "Raindrops Keep Fallin' on My Head (with Kelis) seem more like pointed lessons; Warwick demonstrates the difference between simply giving voice to a lot of notes and truly singing. Ironically, the one song that Warwick revisits alone on this album full of retrospection is a new version of "Déjà Vu, in which she seems to struggle against instead of float along with its currents.

Walk on By; Message to Michael; Close to You; I