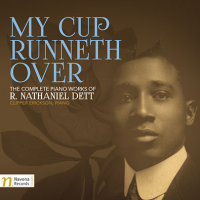 It is infrequent that I hear music by an unfamiliar composer that is so fantastically beyond anything I have heard before that when it happens, I am convinced of the Divine. So it is with the piano music of one R. Nathaniel Dett (1882-1943). Dett was an African-American polymath who was the first black to graduate from Oberlin College with a BA in piano and composition in 1908 and then achieved a Master's Degree from the Eastman School of Music in 1931.

Pianist Clipper Erickson assembles Dett's entire solo piano oeuvre on a slim two-disc set, My Cup Runneth Over: The Complete Piano Works of R. Nathaniel Dett. The result is over two hours of piano music that is so absolutely singular and so little known. Dett's music is not completely unknown in the marketplace. There is another, less complete survey of his piano music by pianist Denver Oldham released on New World Music in 1992 ( R. Nathaniel Dett: Piano Works), as well as, Dett's choral music: Listen to the Lambs: The Music of Nathaniel Dett (Marquis Music, 2003). Erickson's offering tops off the piano music and properly introduces us to the miscible musical interface between European and African-American classical musics.

It is tempting to assign Dett as a "missing link" in American music. He is that, or a traceable outlier. Franz Liszt and Frédéric Chopin (with a smidge of Schubert) are tangibly present. But then, so are Gottschalk, Joplin, Ellington, and Gershwin. But it is in fragrance only. The American elements found in Dett's piano music are potently there, but no overtly so. There are Jellyroll Morton voicings mixing with the church and blues. Dett takes a prominent place between Joplin and Ellington, with out-roads toward Edward McDowall. That said, this is music to be proud of as an American.