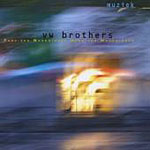 Muziek is much too nondescript a name for an album, but then it is signed off with humility as being by "VW Brothers." While this fact is likely to add to the album's mystique, it demands immediate redress, for this is the memorable document of a musical journey that began years before the Van Wageningen Brothers—that is who the VW Brothers are—arrived in the US from their native Netherlands. The Euro-centric origin of drummer Paul and his bass playing brother Marc is significant, proof of which is found in the bassist's compositions, resplendent in counterpoint and in the playing itself, which abounds in melody and counter melody. But this is also their first album, and the band they co-lead is filled with old colleagues and older musical friends and admirers, from their days with Pete Escovedo and Tower of Power. Moreover, they all bow to the staggering talent of the VW Brothers.

Appropriately or not, the album acts as herald for the musical journey that the Brothers have made, which has a beginning, but may not have a proverbial end. "Euro (Prelude)" is that beginning—a solemn, sweeping gesture, a suggestion of nostalgia full-blown on the English horn that rises and flows, then ebbs as the mystical craft departs from shore. The fade is only momentary, for soon the ensemble returns to titillate with a chart ostensibly worshiping at the altar of a Muse, "Simone," which proffers a glorious spiraling figure of a melody carved out by percussion and features a wonderful, short, staccato melody split into two lines, the second a countermelody that turns the musical phrase inside out. Then the song blooms with the gentle bellowing of Harvey Wainapel bass clarinet, coaxed ever forward by Marc van Wageningen's rolling, pianistic bass.

The sojourn continues with a complex rhythmic reinvention of Miles Davis "Milestones," and then there is no stopping the Brothers. That Marc van Wageningen's grandeur as a true melodicist should have been known a long time ago is one of those things about the widening ripple of today's music that cannot really be controlled. However, "Here we are now," he appears to be saying and everyone's listening suddenly. The bassist writes to organically capture the self-deprecating style of his drum playing brother Paul, who is more of a percussion colorist in the guise of a trap drummer than ever imagined. While not so obvious on "Simone," this is much more evident in the subtle manner by which Paul van Wageningen is written into the musical script on charts such as the mystical "Moon Over Gate 24," the Brazilian inflected "Benito," the Afro-Cuban "El Abogado," and, of course, on the orchestral version of "Euro" at the album's end.

Along the way there is much spectacular music, played by stars who sing and play like soul "brothers and sisters" on one of the year's most tasteful displays of musical composition, virtuoso playing and unbridled improvisation.

Euro (Prelude); Simone; Milestones; Moon Over Gate 24; Zapatos de Madera; Benito; El Abogado; You Guys Done Yet?; What Are You Doing The Rest Of Your Life?; Cecilia's Song; Euro.