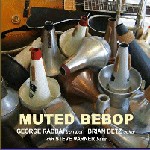 The last time that I saw the Woody Herman Herd perform was circa 1980, and a high-note first trumpeter named George Rabbai was one of the most notable musical figures of that concert. Rabbai, who played with Herman for many years, went on to make his solo debut, Lemon Drop (DBK, 1998), which went unnoticed. The George Wallington title tune on that album was another regular Woody Herman staple that the Herd played on a regular basis.

Not only is Rabbai still active, but the aptly named Muted Bebop, which he co-leads, features an unusual three-piece combo (trumpet/guitar/bass). The concept here is to emulate the classic bebop tunes (largely by Charlie Parker) on ten titles with an ambiance of late night performance, primarily through the use of a variety of trumpet mutes and cups, and without the presence of a drummer.

Beginning with the mid-tempo "Dewey Square" and leaping next to the accelerated "Scrapple From the Apple," the trio doesn't sacrifice anything in terms of bebop vocabulary or accuracy. The only other mid-tempo song is "Bluebird"; the remainder of the titles are challenging tunes like "Confirmation," "Chi Chi" and "Yardbird Suite."

As far as "Dewey Square" is concerned, it certainly could be Miles Davis blowing the horn, and Brian Betz's guitar is right on target, just like Barney Kessel might have interpreted the music on that instrument during the late 1940s. Bassist Steve Varner has the thankless duty of holding the rhythm of this trio together and does an admirable job.

Both Rabbai and Betz share an educational link on the staff of the Maynard Ferguson Institute of Jazz at Rowan University in New Jersey. Steve Varner, a Pennsylvania bassist, is a familiar face in both the Philadelphia and New York jazz scenes.